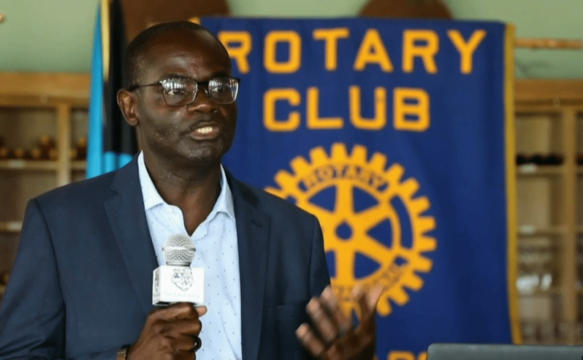 “Critical and painful decisions’ ahead

NASSAU, BAHAMAS — The government could be be facing a fiscal deficit of some $1.6 billion, according to a local economist who noted, “this is a watershed moment for the country”.

With the economy still reeling from the impact of Hurricane Dorian and now the fall-out from the COVID-19 pandemic, Rupert Pinder a University of the Bahamas (UB) professor told Eyewitness News that the government will have to make ‘critical and painful’ decisions in the weeks and months ahead.

“One of the things I am concerned about is that in that there will be a temptation on the part of our politicians to make decisions that will really put is in a jam later on,” said Pinder.

Pinder noted that government was already facing a significant revenue shortfall due to Hurricane Dorian’s impact. That, in addition to what he estimated to be a $600-$700 million revenue drop as a result of the impact of COVID-19 on the tourism sector; the millions of dollars in incentives being offered to businesses and unemployment assistance leaves the government facing in his estimation a shortfall of $1.5-$1.6 billion.

“They are going to have to finance that gap and that will likely mean more borrowing,” said Pinder, who noted that the current crisis is ‘far worse’ than the recession of 2008-2009.

“This is such a defining moment for this country. This is a watershed moment for the country. I know that an election is coming up but the government  has to seriously consider beyond what is popular. This is really a balancing act. There are going to have to be some tough decisions made,” said Pinder who cautioned against actions which could in the long term lead to a devaluation of the Bahamian dollar.

“It’s time to make some painful decisions and cut expenditure,” said Pinder, adding “you have to cut down to the essentials”.

He continued: “Perhaps the Ministry of Finance is already looking at it and hasn’t announced it as yet but I have not heard anything yet about spending cuts. I’m not referring to projects that can actually help the economy but other expenses like consultants and perhaps looking at diverting the constituency allowances and allocating that as part of the social safety net. Right now you need to look at how you can shave off at least 10 percent off the budget.”

The government in an effort to protect up to 10,000 jobs within the private sector  has announced a payroll support initiative for qualifying businesses, as it will forego some $60 million in revenue over the next three months.

Pinder credited the government for the move, but said:“We cannot save everyone. There are some businesses that under normal circumstances would have found themselves out of business.

“The question is, should the government be in the position of having to save a lot of these businesses when it doesn’t really have the ability to do so?”

What we borrow will need to be paid back, this burden will fall onto the backs of all Bahamians, not the Government. Definitely do not borrow from China! The government needs to freeze all accounts of all businesses associated with the Chinese Government . They have been lying about this virus since December that we know of. They have lied to World Health Organization about this virus. The truth would have given the world leaders a chance to control/contain this virus. The Chinese Government should be held accountable, I would argue that they have effectively murdered everyone that dies from this. This is the third virus that they have unleashed on the world. Three? A mistake/accident? Or a deliberate act? Not saying that they created the virus, but using it to further their own agenda.