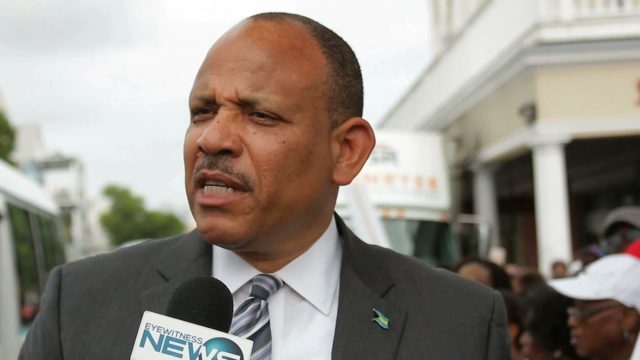 In a statement, the prime minister thanked Sands for his service to The Bahamas, including during the novel coronavirus pandemic.

“I will make a further statement on this matter tomorrow, including on who will serve as minister of health,” Minnis said.

The resignation comes after a revelation last week that six American permanent residents were allowed to disembark a plane along with a donation of COVID-19 test kits and swabs amidst the country’s border closure.

Sands initially told reporters that only two people disembarked the plane, advising during a press conference that he was not sure whether there were more.

However, during a national address on Sunday, Minnis confirmed an additional four people had been allowed to disembark and characterized the entry as a breach of protocol.

Sands posted the resignation letter to his Facebook page today.

“I accept responsibility for this breach of protocol,” Sands said.

“I acknowledge that I acted outside of the scope of my authority in this matter.

Sands remains the Free National Movement’s member of Parliament for the Elizabeth consituency.

This really sucks after all that Dr Sands has done for this nation especially during this Covid19 pandemic. I just hope this doesn’t come back to bite us another day…. I think that we should send the test kits back because we’re the dog that bites the hand that feeds it..

So sad he had to go it’s not fair

Dr. Sands is a life saver, hopefully now he can enjoy a bit more time to himself.

Dr. Sands was was not advised alone. When in authority we have to be careful whom we get advice from, sometimes it costs us big time. A very great man, but took very bad advice. We must follow the correct path always and don’t take chances. I wish him all the best!

This to shall pass. what goes around, comes around.
If Dr. Sands must go, the test kits which were the root of the evil must be given back.
This is no time for a new Minister of Health in the midst of this Pandemic.
Lord please help us..

Dr Sands did the right thing. The PM said that anyone of his ministers brake rank he would fire them. If you commit a serious crime and you know that the police know who you are and where you live you best turn yourself in because you can save face, serious injury or even death. In Dr Sands case political death. ??

Dr. Sands is a hero . I look forward to him leading this country one day … He is prime minister material .
Love you Dr .

Dr sands you are the best, you made a mistake you excepted the fact that u are wrong and u apologize for it, we all make mistakes, but in all of this, u prove you are a real man, only real man apologize and move on, I will al ays be pleas for the hard work u did during the covid 19, and when you come back, u will be stronger, may God bless you as u move forward

So why isn’t the Minister of Tourism being asked to resign too. Dr Sands is a great Doctor but not a great leader. Look at the hospital in GB. It is a series of tents erected by the Samaritan Purse organization.