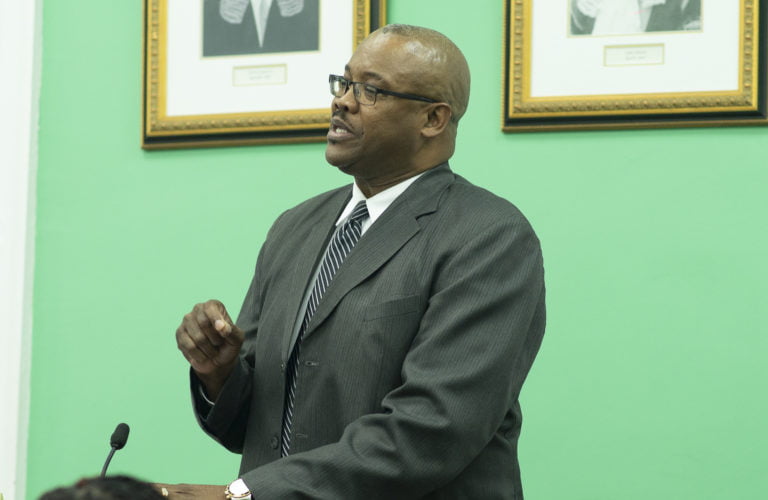 NASSAU, BAHAMAS — Golden Isles MP Vaughn Miller yesterday said he made the decision to join the Progressive Liberal Party with his integrity intact as he voted against a resolution to extend the state of emergency for another month.

The independent MP insisted the prime minister had not presented any information that would justify extending the emergency powers orders.

He explained that he was following his own convictions just as he did in 2018 when he voted against the increase in value-added tax (VAT).

Miller revealed that he had been battling thyroid cancer when he was subsequently fired from his Parliamentary Secretary position as a result of his vote, and had made the decision despite shouldering the financial burden of treatment.

“For me personally, I am a cancer survivor,” he said.

“I had thyroid cancer, a thyroidectomy and it took a financial toll on me and quite frankly when it was time to vote, it wasn’t much of a wrestle, but I thought about it and I knew financially it wasn’t a wise decision to vote against the bill because I knew what would happen.

Miller said he entered Parliament as a “free black man” with his integrity intact.

“When the time comes that I make my final stand in this place, I intend to do so and to leave as I came, a free black man with my integrity intact,” he said.

The Golden Isles MP announced shortly before 7pm that he had crossed the floor to join the Progressive Liberal Party.

“I’ve been in constant conversation with my wife. I’ve spoken to the members of my family, constituents, church leaders, religious leaders and others,” he said.

“I’ve also thought and prayed long and hard, and it has become extremely clear to me what I must do.

“It is time for me to do what I believe is best for me.

“I’ve been in conversation with the leader of the opposition and after careful reflection, I’ve decided to join the Progressive Liberal Party.”

“I spoke to the leader of the opposition about joining the PLP and sitting with this Parliamentary caucus from now until the general election, offering to be the next representative for the great Golden Isle constituency as a Progressive Liberal Party member of the Parliament; and he assured me that he will welcome me into the party and into his caucus.”

The PLP now holds five seats in the House of Assembly.

“I have been speaking to him for some time,” Davis said.

“I think his experience mirrors that of many Bahamians, who wanted to believe the promises made by the Free National Movement in 2017, but who came to realize that this government has neither the intention nor the capacity to keep those promises.”

Miller announced his resignation from the FNM on December 11, as he contributed to debate on an amended resolution for a vote of confidence in Prime Minister Dr. Hubert Minnis.

At the time, Miller gave a scathing review of the Minnis administration and several decisions taken this term, including the decision to lease the Town Centre Mall for the relocation of the General Post Office.

In response to the announcement, Minnis scoffed at Miller’s resignation, saying he and former FMN MP Reece Chipman only needed three more parliamentarians to join them to become the official opposition.

“Mr. Speaker if those two members were to get together under CPU, as a cohesive political unit, then I believe that those two members would be entitled to appoint one senator themselves,” said Minnis, to a chorus of laughter from governing members.

“If they get three more then there’d be no more PLP. They would be the official opposition. Do you want to borrow three of us?”

The prime minister then erupted in laughter.

Miller was the second FNM MP to sever ties with the party, and the first under the Minnis administration to cross party lines.

Last October, Chipman announced his resignation from the FNM in the party’s WhatsApp group chat.

Both Chipman and Miller have taken positions against the Minnis administration throughout their tenure on key national issues, including the government’s decision to increase value-added tax from 7.5 percent to 12 percent in 2018.

Bain and Grants Town MP Travis Robinson, Pineridge MP Frederick McAlpine also voted against the measure — a move that prompted the public to dub them the ‘Dissident Four’.

The men were all stripped of their government appointments; however, Chipman had already been fired from his post as chairman of the Antiquities, Monuments and Museums Corporation earlier that year.

Robinson has since been reinstated as a parliamentary secretary.

An earlier version of this article incorrectly stated that MP Vaughn Miller had been given the nomination for the Golden Isles seat by the Progressive Liberal Party. During his contribution, Miller stated that he had offered himself to be considered for the seat.