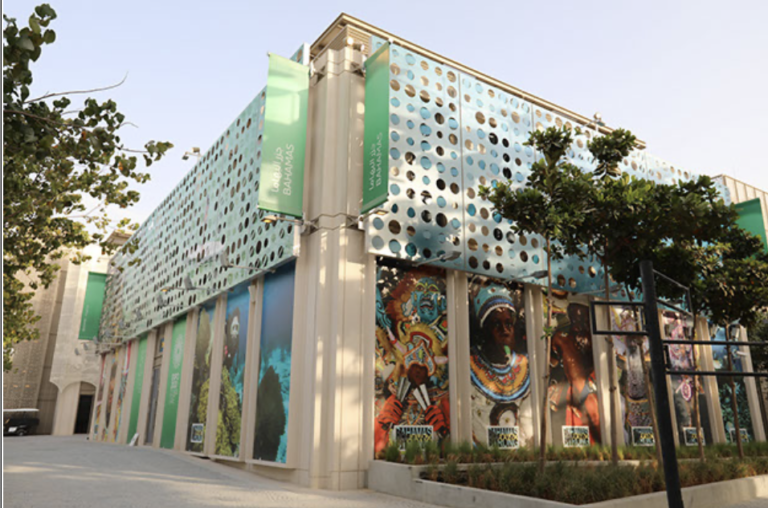 The Bahamas' pavilion at the Expo 2020 Dubai, UAE

NASSAU, BAHAMAS — The Free National Movement (FNM) yesterday called on the government to give a detailed account of the country’s participation in Expo 2020 Dubai, UAE, including a justification for how artists and artisans were chosen to participate.

The call comes amidst widespread criticism over the size of the delegation and the choice of participants, which includes a Junkanoo Group, The Royal Bahamas Police Force Band, The Bahamas All-Stars Band and the Shaback Choir.

Many Bahamians took to social media to express concern and anger over the government’s failure to include prominent cultural performers, like the National Youth Choir.

Among those voices was former Director of Cultural Affairs Dr Nicolette Bethel, who described the country’s pavilion as an “an unholy mashup of what happens when politicians get involved”.

Bethel noted that nearly five years ago,  University of The Bahamas students started the initiative with designs of the pavilion but over the years, professors and architects on the front line were struggling to get the government to see the value of the opportunity.

She explained that contingents to represent The Bahamas in an “unexpected and excellent way” were proposed but were shot down because of the cost.

The cultural advocate insisted that when COVID-19 started “sense left and nothing happened and so what we see is what we get”.

Meanwhile, in a Facebook post, Pamela Burnside, owner of the Doongalik Studios and Art Gallery labeled the delegation as “inappropriate” due to the contradiction of some of the performances to the country’s religious beliefs and cultural practices.

“I am totally flabbergasted, upset, and embarrassed for my beloved country to see that they have sent a mostly totally inappropriate delegation to the Dubai Expo to represent whilst disrespecting the culture of the host country,” Burnside wrote.

She pointed to popular Bahamian entertainer Miss Daisy, who is well-known across the country for her rants and vulgarness.

She further questioned why a praise and worship choir was sent — instead of the National Youth Choir — which is also in contravention to the UAE’s Islamic practices and laws that do not permit attempts to spread Christianity among Muslims.

Burnside insisted that The Bahamas must apologize profusely for the inappropriate behavior.

Up to $1 million was approved by Cabinet to support the country’s participation in Expo 2020 Dubai, UAE, between October 2021 and March 2022, according to the Communications Director in the Office of the Prime Minister Latrae Rahming.

Rahming advised that the government of the United Arab Emirates (UAE) donated $3.5 million for The Bahamas’ pavilion and the private sector contributed about half a million dollars.

He defended the government’s delegation to the global cultural exchange as a “justified investment”.

Rahming explained that Prime Minister Philip Davis departed for the United Arab Emirates on Friday to attend Expo 2020 at the invitation of the Royal Family but to also hold a series of bilateral trade meetings.

However, in a statement on the matter, Former Minister of Youth Sports & Culture Iram Lewis insisted that the country’s participation has no clear sense of the benefits for the Bahamian people.

He explained that the former administration placed a suspension on travel for all Cabinet and government officials during the pandemic and sought to save as many resources as possible and divert them into COVID-19 mitigation efforts.

“The government could have made a much more prudent decision that could have included sending a much smaller delegation to participate in a targeted way for a more desired impact,” he said.

He also questioned whether the government received the all-clear from local health professionals regarding the Dubai trip and how the decision might impact the country’s COVID-19 situation in the country.

“The govt. of Dubai decided that the expo would continue and it is the responsibility of The Bahamas to have a good showing,” Darville said.

“One of the things we must realize is that most of the other Caribbean countries are going and for good reason.

“It gives us an opportunity to demonstrate who we are, to being to look for the possibility of direct foreign investment and it’s a good thing to partner because from my understanding resources have also been spent by the Dubai government”.

The initiative was initially spearheaded by the Christie administration in 2016.

Yesterday, former Minister of Financial Services, Trade & Industry Elsworth Johnson denied claims that he and an FNM delegation visited the UAE in support of the expo, adding that the government’s trips in December 2019 were to promote the country with the Bahamas Financial Services Board in the aftermath of the deadly Hurricane Dorian.

The Bahamas will be highlighted today with the celebration of The Bahamas National Day at the Expo.

Any complete and verfified deets on hurricane dorien spending??