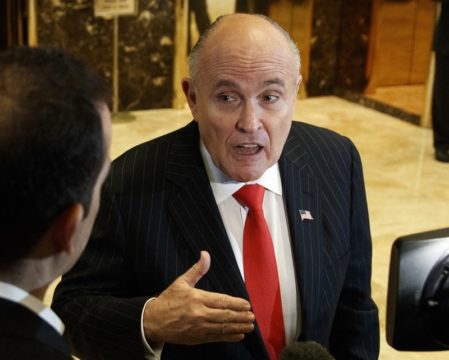 The former New York City mayor insisted on Fox News Channel Wednesday night that the payment to adult film actress Stormy Daniels was “going to turn out to be perfectly legal.”

Some legal experts disagree. A look at some of the issues at play:

Giuliani’s insistence the money had nothing to do with the campaign is complicated by the fact that Daniels’ silence was secured just days before the 2016 presidential election, and as Trump was dealing with the fallout from the “Access Hollywood” tape in which he bragged about sexually assaulting women.

If the payment were wholly personal, said Richard L. Hasen, an expert in election law at the University of California, Irvine, there would be no campaign finance violations.

But Giuliani’s argument that the payment was unrelated to the campaign appears to be “pretty far-fetched” given the timing, said Andrew Herman, an attorney specializing in campaign finance law at Miller & Chevalier.

“Certainly, the argument that the government will make is that the $130,000 payment from Michael Cohen to Daniels was a loan to the Trump campaign to keep these allegations secret obviously and then Trump paying Cohen back would be a campaign expenditure” — a loan and expenditure that should have been disclosed to the Federal Election Commission, he said.

Larry Noble, general counsel of the nonpartisan Campaign Legal Center, agreed the timing “is still strong evidence of it being campaign related,” as is the reimbursement.

“And if the money was funneled through the law firm as legal fees, as Giuliani suggested, it shows an intent to cover up the source of the funds,” he said.

All campaign expenses, including payments and loans, are supposed to be disclosed to the FEC.

Hasen said the question before Wednesday had been whether Cohen had made an unreported contribution to the Trump campaign exceeding legal limits.

“If this is true, then it looks like Cohen may have made an unreported loan to the campaign rather than a contribution,” he said. That could be good news for Cohen, because it would have been up to the president or his campaign to report the loan, not up to Cohen.

“The greatest significance is that it implicates the president, directly,” he said. “If it’s done with Trump’s knowledge … then now we’re talking about something that is related to the campaign and is more serious.”

Norm Eisen, who served as an ethics lawyer in the Obama White House and now chairs the left-leaning Citizens for Responsibility and Ethics, which has repeatedly challenged Trump, also said Trump should have disclosed the loan on his federal financial disclosure.

“There’s probably a sufficient basis for DOJ to open another investigation about whether the president was candid on his personal financial disclosure,” he said.

It wasn’t immediately clear what Giuliani sought to gain with the admission.

Eisen suggested it might have something to do with the fact that Cohen is under criminal investigation in New York. FBI agents also raided his home and office several weeks ago seeking records about the nondisclosure agreement.

“I think the other intention here apparently was to tear the Band-Aid off and to get out in public whatever Cohen might offer should he choose to cooperate,” speculated Eisen.

Sol Wisenberg, a defense attorney who was a deputy independent counsel during the Starr special counsel investigation into President Bill Clinton, said the comment “obviously increases the president’s exposure to potential campaign finance violations, but it also makes him look terrible.”

“I don’t understand the Giuliani strategy,” he added. “Maybe it’s been too long since he’s been in the criminal justice field.”

Noble was equally confused. “I really don’t know why Giuliani said what he did. He made things worse for Trump.”