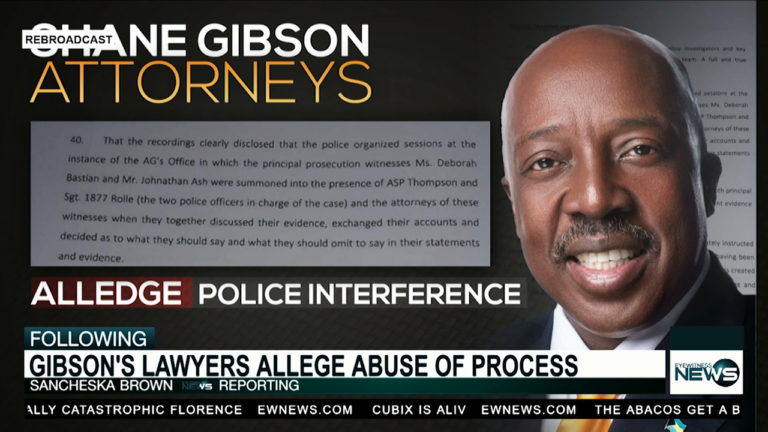 Lawyers for former cabinet minister Shane Gibson are requesting the police diary for September 25 2017, after it was alleged that the statements of the prosecutions two main witnesses were “coached” and evidence was alerted by lawyers and the officers attached to the anti-corruption unit.

Edward Fitzgerald, QC, lead attorney for Gibson said he seeking a stay of the proceedings and have the case thrown out citing an abuse of process. Fitzgerald told the court it was wholly improper for the police to conduct meetings with the two prosecution witnesses and their lawyers, to allegedly discuss, amend and edit evidence as well as backdate statements to have them appear that they were given before Gibson was charged.

Transcripts of the meeting, which took place in 2017 detail how the two witnesses, Johnathon Ash and Deborah Bastian were told by lead investigators, police officers ASP Thompson and Sergeant 1877 Rolle… what to leave out of their statements and how to get them to match up as their accounts of the events…including how much money was allegedly paid to Gibson…. differed.

In order to support that application Fitzgerald said there was a number of things he needed from the prosecution including the police diary and answers as to why the officers conducted that meeting, is there a statement for September if so, where is it and if not why the statement was allegedly backdated.

As the prosecutions main attorney James Gutherie was not present for today’s sittings, another crown attorney Terry Archer said he was not prepared to provide any of the information and felt “ambushed” and blindsided.

Both sides agreed to submit their submission to the court before a directions hearing is held on Nov 2, the defence on Oct 8 and the prosecution before Oct 29.

The abuse of process hearing will take place on Nov.26.

The case was originally being heard in front of chief justice Stephen Isaacs but is now before Justice Indra Charles.

Last August Gibson was accused of receiving $610,000 in kickbacks from a private citizen, who had a multi-million-dollar contract with the ousted Progressive Liberal Party (PLP) government.

In addition to the extortion charges, the misconduct in public office charge was dropped earlier this year.