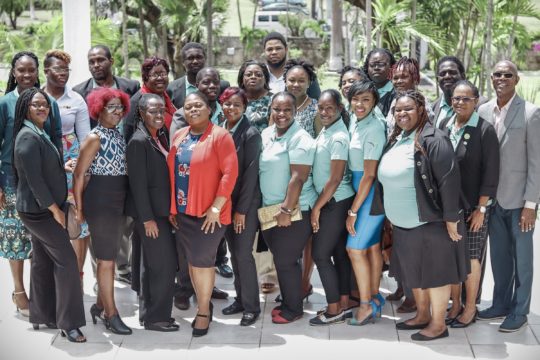 NASSAU, BAHAMAS – A dozen new and relaunched units, 1,208 first-time participants and strong financial support from the public and private sectors over the last year were just a few of the highlights and focus of presentations at the Governor General’s Youth Award’s Annual General Meeting held at Government House over the weekend.

“Many of our young people are falling through the cracks. That’s the bad news,” said Archdeacon James Palacious, chairman of the youth organization’s Management Council. “The good news is that there is GGYA and we are in the process of mending those cracks.”

A non-formal, education framework which challenges young people to discover their potential and find their purpose, passion and place in the world, GGYA embraces all youths regardless of their background or abilities.

The local programme with global connections continued to diversify itself in 2018. It registered 103 persons from immigrant communities or ethnic minorities; 107 individuals considered at-risk or marginalized and 10 persons with a physical and/or learning disabilities.

Widely popular with high school students the Award worked to extend its outreach to older youths in the 18 to 25-year-old category and to middle school students under the age of 14, in resurrecting its Young Adventurers initiative with a pilot programme at Claridge Primary. Its dual efforts proved successful.

GGYA attracted 19 young adults in addition to launching a new unit at the Bahamas Agricultural and Marine Science Institute (BAMSI) in Andros.

Meantime, the Young Adventurers Programme positively impacted its community through a beach clean-up. Impressed by the group’s hard work and dedication a crude oil company donated $5,000 to assist with the unit’s operations.

GGYA’s national office didn’t stop there. It also worked to get new units up and running at Noble Academy, Tambearly and Teleos Christian School, while two schools combined to form one group on Cat Island, bringing the number of registered units across the nation to 56.

Nearly 80 per cent of GGYA’s 1,530 participants were new, 793 of them were females and 737 males. Helping to develop the young people’s character and skills such as confidence, communication, problem-solving and resilience were 155 Award leaders and 48 volunteers.

In his written report, Everett Mackey, treasurer of GGYA’s Board of Trustees noted that the organization was successful in obtaining grants from Cable Bahamas, the Lyford Cay Foundation, T.K Foundation, and the Department of Gender Equality and Family Affairs in the Ministry of Social Services and Urban Development.

Additionally, the Ministry of Youth, Sports and Culture and Ministry of Education, Science and Technology continued to provide significant financial support to the programme.

The newest benefactor, the T.K Foundation, is assisting GGYA in championing the growth and development of young people in The Bahamas’ northern region.

To ramp up recruitment efforts, the organization’s national director, Denise Mortimer is expected to relocate to Grand Bahama for one year to boost enrollment figures and ultimately empower more young people with not just the confidence but the desire to create meaningful change.

“We want to focus on extending the Award programme as far as we can get it in The Bahamas,” she told the gathering of unit leaders, volunteers and other stakeholders from across The Bahamas assembled at Government House Saturday morning.

“We want to reach many more young people. We are leaving a lot of our at-risk young persons behind so that is what we are trying to do and without you, we can’t do it. We are hoping that in 2019, we can reach our goal of 2,000 young people.”

The Duke of Edinburgh’s International Award, of which GGYA is an affiliate, challenges young people to dream big, celebrate their achievements and make a difference in their world through developing transferable skills, increasing their fitness levels, cultivating a sense of adventure and volunteering in their community.

To date, 31,000 young people in The Bahamas have gone through the programme.