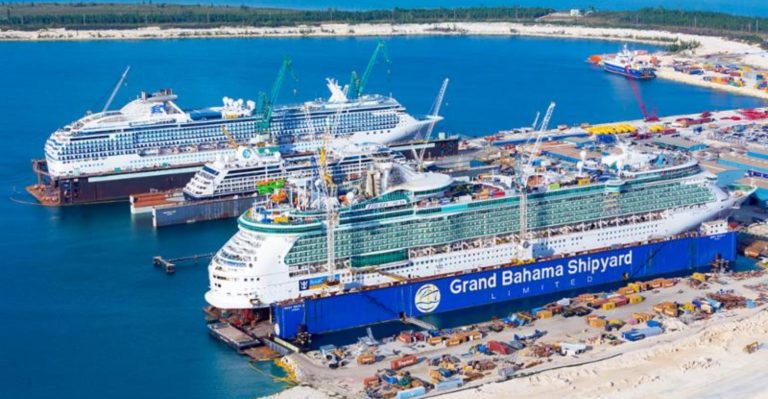 NASSAU, BAHAMAS — The Grand Bahama Shipyard yesterday unveiled a three pillar ‘survival plan’ as developments over the past 15 months have brought it to the “brink of closure”.

A part of that plan includes workforce restructuring, according to a statement, which confirmed that 67 Bahamian workers were offered, and accepted redundancy packages.

“Unfortunately, our survival will necessitate changes to both the Bahamian and foreign workforce in order to bring down overall numbers,” the statement read.

“This is key to making our pricing more competitive and attracting new business. It is also a reflection of the reality that we have only one operational dock and can only take a far reduced number of projects at any one time. As a result, 67 of our Bahamian workers have been offered and accepted redundancy packages. It is important to note that this was not an adversarial process as most of our workers appreciate the situation and many welcomed the packages.”

The company noted that the packages are over and above legal minimums.

“Moving forward, as new projects come in, the workforce will increase by up to hundreds of Bahamians based on the needs of each particular job, which is why we have to be very cost competitive to secure this work,” the statement continued.

“Accordingly, we have committed to reaching out to those made redundant when ships come in, either directly or through local subcontractors. Most Shipyards around the world, when forced to downsize, bring in temporary foreign workers at the most competitive prices; we are committed to bringing in Bahamian workers whenever possible.”

The statement read: “Our quota of skilled foreign workers has also been greatly reduced, though a core group will remain on island to be drawn from as needed. We will always need a mix of local and foreign labor to be economically viable and to ensure we have the correct skills. We are no different from any other shipyard in the world in this respect.”

The GB Shipyard noted that the loss of two of three dry docks – one in an accident in April 2019, the other in Hurricane Dorian – had cut operational capabilities by 75 percent. Added to that was the fall-out from COVID-19 including total loss of cruise business, by far its most lucrative sector.

The GB Shipyard also noted that a new union agreement is also a part of its plan, as the old agreement expired in April 2020.

The statement read: “We have proposed an agreement which we believe will help us balance the books, become more price competitive and avoid going under. The proposal preserves virtually all the benefits of the previous agreement, including: payment of contributory pension scheme, health insurance, education allowance, two-week bonus at Christmas, guaranteed alignment with the law of redundancy packages, sick leave and other benefits.”

The company is also seeking to secure funding for replacement docks.

“Together with our shareholders we are looking to secure funding for replacement docks and will communicate further on this when the global pandemic situation and its impact become clearer, the statement read.

“Having an efficient right-size company that works safely and cost competitively, in continuing cooperation with the government, is an essential element in attracting funding for new replacement docks. If the above changes are made, we believe that the shipyard will not just survive, but will thrive once again,” the company said.

The company yesterday also responded to a statement and questions by Kirkland Russell, vice president of the Commonwealth of the Bahamas Trade Union Congress regarding its restructuring exercise.

In a separate response the company indicated that the 67 employees did not have their contracts terminated but were offered redundancy packages.

The company also pushed back against the assertion that “not one of the foreign workers was terminated”, calling it ‘false’.

“In fact, our foreign workforce has been reduced by 86 percent compared to 2019 levels,” the statement read.

“Nearly 100 were laid off and repatriated over the past few months as part of this current restructuring exercise. It is false to claim that foreign workers outnumber Bahamians at the Shipyard. Currently, there are nearly double the number of Bahamians as foreign workers.

“We will always need a mix of skilled local and foreign workers, just like any other shipyard in the world. We have always worked to ensure that we employ the maximum number of Bahamians possible. The salaries and benefits to the Bahamian employees far exceed both the industry standard and what we offer foreign workers.

“It is incorrect to suggest that the Department of Labour or any other Government agency has dropped the ball on this matter. Throughout our discussions with Government officials, their top priority has been to insist on the preservation of as many Bahamian jobs as possible,” the company said.

There are now 196 Bahamian employees and 82 foreign workers permanently employed at the yard.

“This number will vary on a daily basis but as we continue to operate we will see up to 150 additional Bahamians employed and up to 70 sub contract expats where Bahamians cannot fulfill the roles or do not have the required skill,” the company said.

The shipyard also pushed back against claims of labour exploitation stating: “Our Bahamian workers’ salaries are far above the industry standard around the world and their benefits we believe are unrivaled in the industry, including: a contributory pension scheme, an education allowance,  a two-week Christmas bonus and sick leave, among others.”