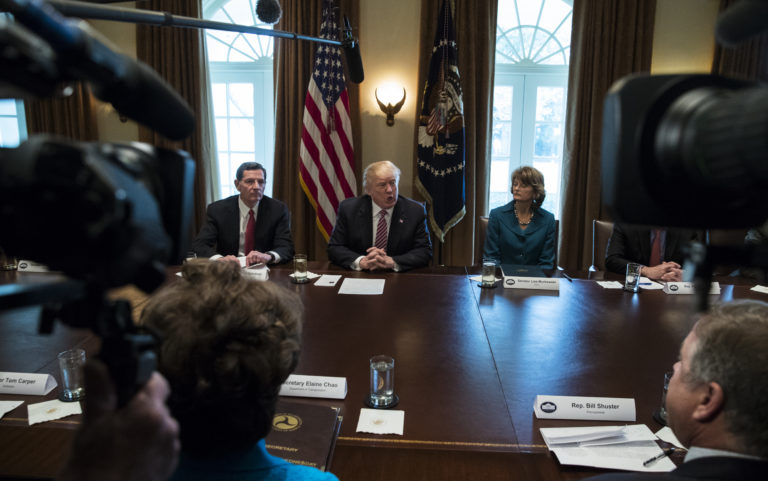 WASHINGTON (AP) — President Donald Trump on Wednesday signaled his openness to a 25-cent fuel tax increase to help pay for his infrastructure proposal.

Sen. Tom Carper of Delaware said Trump told lawmakers in a White House meeting that he would be willing to provide leadership on such an increase.

“To my surprise, President Trump, today in our meeting, offered his support for raising the gas and diesel tax by 25 cents a gallon and dedicating that money to improve our roads, highways, and bridges,” Carper, a Democrat who has advocated for the increase, said in a statement.

He said the president “came back to the idea of a 25 cent increase several times throughout the meeting.”

Trump made the comments, first reported by Axios, in a meeting with members of the House and Senate to discuss his plan to rebuild and restore the nation’s roads, bridges and ports.

The White House unveiled a proposal Monday to use a $200 billion federal investment to leverage more than $1 trillion in public and private funding to pay for the upgrades.

The White House proposal is silent on what the administration would do about the Highway Trust Fund, which finances most highway and transit projects through the fuel taxes. The trust fund is forecast to go broke in 2021.

Some lawmakers and prominent groups like the U.S. Chamber of Commerce have called for a 25-cent, phased-in increase in the federal gas tax to bolster the nation’s highway trust fund.

But any tax increase would represent a political risk for members of Congress in an election year.

The federal gas and diesel tax hasn’t been raised since 1993.

Trump said during the meeting he believed Republicans and Democrats could “find common ground” on infrastructure, adding, “We’ll see how it all turns out.”

The White House declined comment on the president’s discussions during the closed-door portions of the meeting. But a White House spokeswoman said “everything is on the table” in the infrastructure plan and the gas tax has “pros and cons.”
__
This article was written by KEN THOMAS, Associated Press. Associated Press writer Darlene Superville contributed to this report.