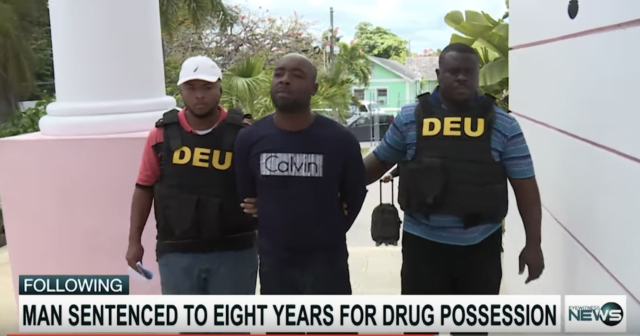 According to police reports, shortly after 2 p.m. on Tuesday, May 28, 2019, Drug Enforcement Unit Officers observed Lewis in the Customs Hall at the Lynden Pindling International Airport, who was acting in a suspicious manner once he became aware of their presence.

The officers searched Lewis and his bag and recovered a package which contained suspected cocaine.

The prosecution alleged that when asked about his checked luggage, Lewis told officers it was left in Suriname. However, when officers took him to the conveyor belt, they discovered a bag with his name on the tag.  Lewis allegedly told officers that while in Suriname a woman told  him to bring the bag to Nassau and someone would pick it up. He claimed he was not aware of the contents of the luggage and said the woman paid him $1,200.

Lewis pleaded guilty to all four counts and asked the court to be lenient.

However, Magistrate Swain, while looking through his records, found that he had several prior convictions relating to drugs dating as far back as 2002.