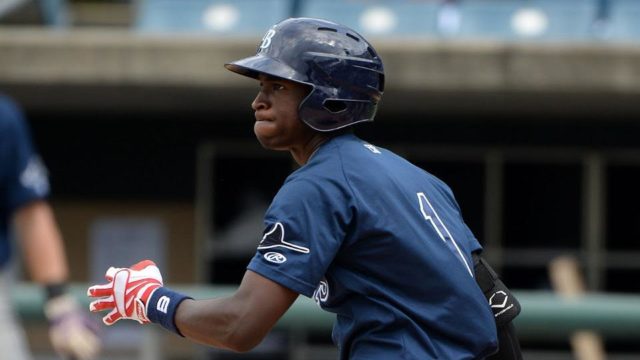 Bahamian professional baseball player Lucius Fox continues to make his presence felt at the highest level of minor league baseball as the Tampa Bay Rays’ No.7 prospect had another huge game for Class Advanced Charlotte on Sunday, tying his career high with four hits in a 10-8 win over Palm Beach at Charlotte Sports Park.

“Preparation and what I do before the game is so key,” Fox said about his hot start to the season.

“I’ve developed a routine that I’m comfortable with and I’m taking that into the game. It’s my third year in pro ball. With that comes experience and I’ve learned more about my swing and the type of hitter that I am, which has helped me get into the best position to hit the ball hard and find a nice balance once the games start.”

The 20-year-old began the bottom of the first inning with a soft single to left field and stole second. He grounded out in the second but increased Charlotte’s lead with a two-out RBI triple to center in the fourth. In the fifth, Fox hit another single to left to plate another run and followed that up with a ground ball into left again, to complete his first four-hit game since June 11 with Class A Bowling Green.

To date, Fox has nine multi-hit games through the first 15, including three of the last four. Along with his accomplishments at the plate, Fox has also remained a plus runner with a 4-for-5 success rate on stolen-base attempts.

“I’m up there concentrating on line drive swings,” he explained.

“I don’t necessarily try to hit the ball on the ground, but I’m also not trying to hit fly balls all over the yard. I want to hit low line drives and take what the defense gives me. If there’s an opening on the right side, I’ll try and push it through that hole.”

Fox had a breakout season last year with AA Bowling Green and was called up to High-A Charlotte on July 26. Prior to the move, he had been putting together a good season with Low-A Bowling Green, hitting .278 with a .362 on-base percentage and a .361 slugging percentage.

The week prior to being called up to High-A Charlotte, Fox played in the 2017 SiriusXM Major League Baseball (MLB) Futures All-Star Game. He drove in an RBI in the loss for team world to Team USA.

“The transition from (Class A to Class A Advanced) was big,” he said.

“The pitchers are tougher here and have a lot better command. They’re able to throw multiple pitches for strikes and you don’t see as many fastballs. You’ll get that one pitch to hit each at-bat but, if you miss it, they’ll make you chase and expand the zone. But coming off last year, I realized what they’re trying to do, and I’ve adjusted. I feel much more comfortable at the plate.”