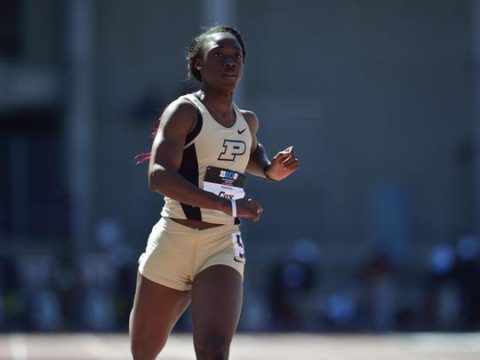 Carmeisha Cox was a part of the Purdue women’s 4×400 meter (m) relay team that finished second overall in a Big Ten Conference record 3:28.82 in the event final. Cox split 52.07 on the third leg to keep the Boilermakers out front, and Jahneya Mitchell brought it home, clocking 52.04, the second-fastest final leg of the heat to capture the silver medal.
With the second place finish, Cox, Mitchell, Chloe Abbott and Brionna Thomas earned First Team All-America honors in the event. It was the first time the program ever earned honors in the 4×400.
USC was first in the women’s 4×400 in 3:27.45, while Florida finished third in 3:29.41.
Saturday’s race was Cox’s last as a collegiate athlete, as she’s no longer eligible to compete outdoors.
Also on the track, Pedrya Seymour, from the University of Texas, finished 10th overall in heat 2 of the women’s 60m hurdles in 8.13 seconds. Seymour, who is making a comeback this season, after missing most of last year with a hamstring injury, came into the event tied with three others with the 12th-fastest time overall.
Over on the field, Kaiwan Culmer, from the University of Nebraska, finished 10th overall in the men’s triple jump with a leap of 15.97m (52′ 4 3/4″). O’Brien Wasome, from Texas, won the event in with a best mark of 16.82m.
Culmer came in with a qualifying mark of 16.08m (52′ 9 1/4″), which won him the Big Ten title two weeks ago in Geneva, Ohio. The 16.08m was also a career best mark for Culmer.
And in the men’s long jump, Arkansas’ Laquan Nairn musterd an 11th place finish with a best mark of 7.52m (24′ 8 1/4″).
Nairn came into the event ranked 11th overall with a season’s and personal best of 6.94m (22′ 9 1/4′).