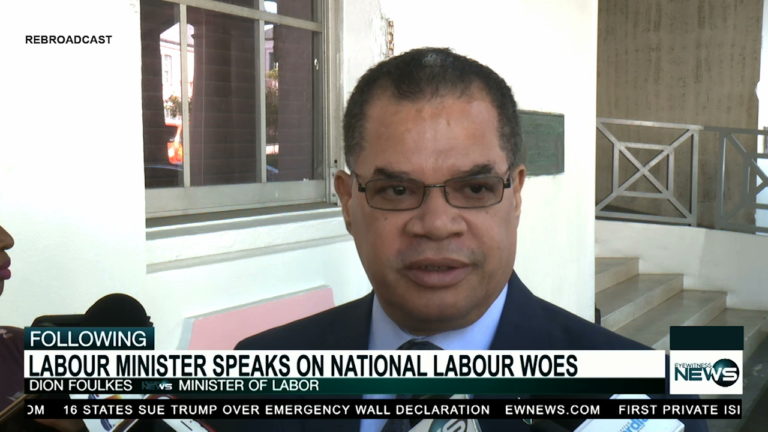 NASSAU, BAHAMAS – Following mass layoffs at Commonwealth Brewery on Monday, continuing tension between employees at the Bahamas Telecommunications Company (BTC) and its executive management team and ongoing employee tension at Morton Salt in Inagua; labour minister Dion Foulkes provided Eyewitness News Online with an update on how these labor issues are being actively addressed.

Seventy-three former employees at Commonwealth Brewery found themselves on the unemployment line on Monday.

But, according to Foulkes there is still hope.

The labor minister said the company has created 30 new positions and noted that the employees laid off during the right-sizing process will have first dibs on applying for those positions.

“The employment act says that those positions must be offered to the persons who were made redundant. So, we are following up on that to ensure that that happens,” he said.

“I have been made to understand that some of the 73 have already taken some of the new positions, so that is very encouraging.”

This would mean that if the terminated employees filled all 30 of the new positions at Commonwealth Brewery, 43 would still remain unemployed.

“Still 43 is too much. One is too much. So, the Department of Labour and government will do all that it can to assist those persons,” the labour minister said.

Meantime, tensions in Inagua at the Morton Salt company are still contentious.

Morton Salt employees and management at the salt company are at an impasse in regards to an increase in salary and a proposed increase to their health insurance, the labor minister said.

But, government is hopeful that the company’s management team and its workers will be able to come to an amicable agreement expeditiously.

The alleged sick-out forced the telecommunications company to temporarily close 12 of its locations.

The minister said that he will take the union’s word that it was not industrial action.

He confirmed that BTC’s executive team has agreed to meet with its union to address outstanding issues.

“I am very happy that BTC management has agreed to sit down with both unions, both the managerial union and line staff union, to work out any proposals that they have that affects the staff,” Foulkes said.