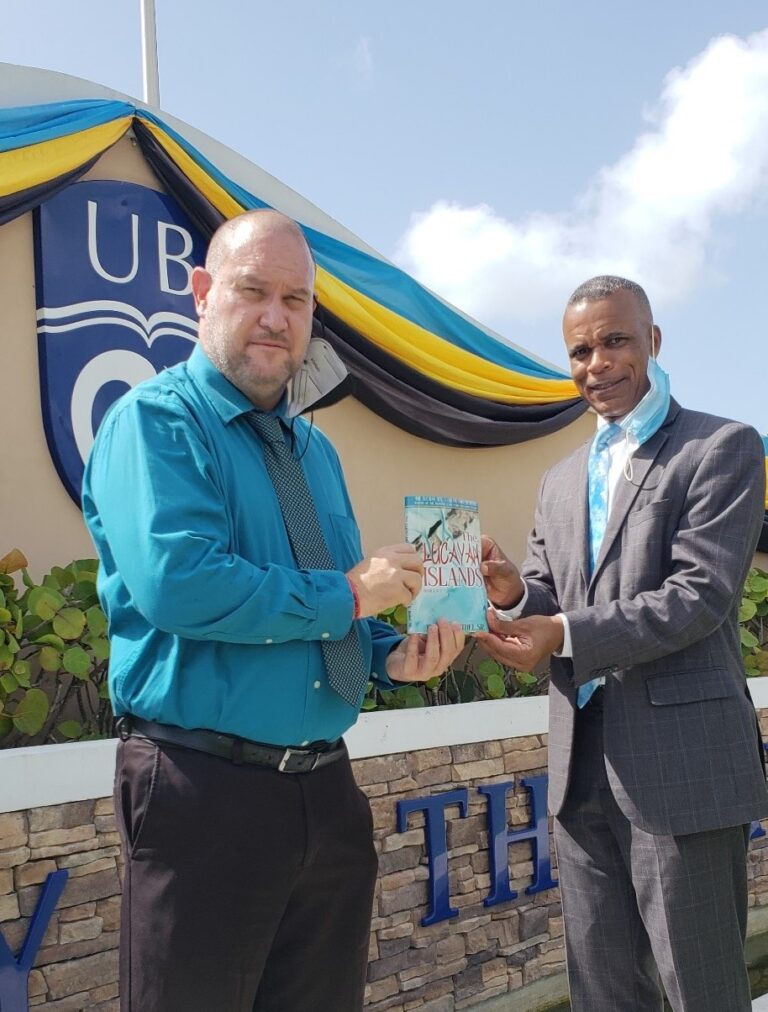 Dr Christopher Curry (left0, associate professor of history at the University of The Bahamas (UB), receives the first copy of “The Lucayan Islands”, the first of a three-part series by fellow historian and author Captain Tellis Bethel, former commander of the Royal Bahamas Defense Force (RBDF).

NASSAU, BAHAMAS — It was over 500 years in the making and more than a decade in the dissecting and now the history of the Lucayan islands is coming to life in a trilogy by former Royal Bahamas Defense Force (RBDF) Commander Commodore Tellis A Bethel.

This week, Bethel presented an advance copy of the first book in the series to University of The Bahamas top historian Associate Professor Christopher Curry, PhD.

Called “The Lucayan Islands” and subtitled “The Lucayan Seas: A Case for Naming the Historic Waters of The Bahamas & The Turks And Caicos Islands”, the book is Bethel’s fifth, with the remaining two of the new series set to be published in September.

“The unnamed waters surrounding The Bahamas and Turks and Caicos Islands deserve a name that befits their rich heritage,” said Bethel, who plied the more than 100,000 square miles of open ocean for decades as a naval officer and now holds the title of standards inspector of the security forces.

“These waters mark the spot where the trail of an ancient migration ended in humanity’s quest for a better life, the Old World of Europe encountered an ancient world within the Western Hemisphere, human civilization was permanently reunited at the dawning of a new era and the modern nations of the Americas were founded. Yet, these historic waters remain nameless.”

Bethel has proposed naming the waters the Lucayan Sea after the original inhabitants, the Lucayans, noting that the Caribbean Sea to the south was named after the indigenous people of those island nations. The idea has garnered support from numerous environmental and civic groups as well as notable individuals, including the late Sir Durward Knowles.

“The name ‘Lucayan Sea’ is an authentic name that embodies the profound history, geography and culture of the entire Lucayan archipelago and its inhabitants,” Bethel said.

Naming the waters of The Bahamas — now just part of a vast Atlantic Ocean — has the full support of Curry, whose studies of colonial Bahamas have helped define the era and culture that shaped a modern Bahamas.

“I was honored when Commander Bethel asked me to review his first draft of his latest history of the Lucayan islands and happy to share insight and information,” said Curry. “I have no hesitation in fully and enthusiastically endorsing naming the waters of The Bahamas the Lucayan Sea.”

“I am so grateful to him for the time he took and for so generously sharing his knowledge,” he said.

Both scholars agreed the social and financial impact of naming the waters could be beyond measure. For Bethel, he hopes being part of a Lucayan Sea-branded area would encourage a return to a more peaceful Bahamas. Curry thought it is a fitting historical tribute. Both noted the branding could re-launch The Bahamas in a new light and once again help to strengthen economic and cultural ties between the sister states of The Bahamas and Turks and Caicos.

“As the birthplace of the Americas, the Lucayan Sea would be a ‘hemispheric brand’ that could diversify industry, generate employment and enhance heritage tourism with far-reaching benefits for both our orange and blue economies,” said Bethel.

The book is available for Kindle and paperback formats on Amazon (“The Lucayan Islands”) and will be sold in local stores in August 2021, with the remaining two books in the series to become available by September.