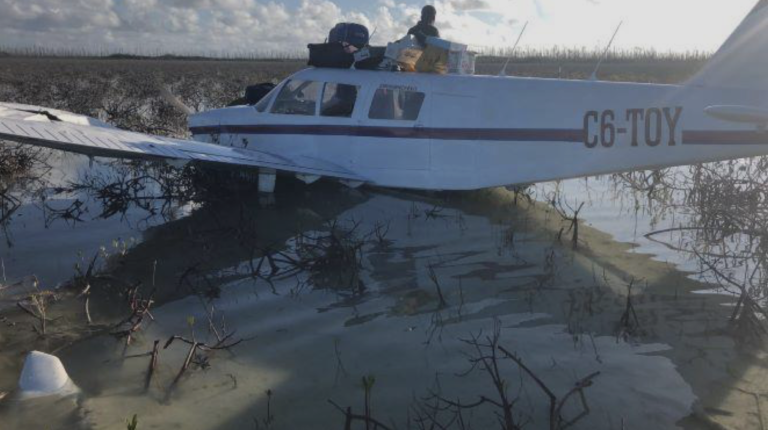 The Piper PA32 Cherokee Six piloted by Bishop Cedric Bullard when it crashed on Abaco in August 2020.

NASSAU, BAHAMAS — Bishop Cedric Bullard, who crashed landed a small plane into the swamp at Treasure Cay, Abaco, with four passengers on board in August 2020, operated the aircraft without valid certificates of registration and airworthiness, according to an Air Accident Investigation Department (AAIA) report.

According to the final AAIA report, the certificates of registration and airworthiness for the Piper PA32 Cherokee Six expired on March 31, 2017 — nearly three and a half years before the accident.

It was en route to New Providence.

The pilot ditched the aircraft in a nearby swamp after reporting loss of engine power.

There were no reports of injuries, though the aircraft sustained damage to its wings and propellers.

The weather was not a factor in the accident, according to the AAIA, which said weather at the time of the accident was “visual meteorological conditions”.

Bullard, a former president of Abaco’s Christian Council, got his pilot’s license in 1995.

At the time of the crash, the bishop held a valid private pilot license dated April 26, 2018, and a second class medical certificate issued August 2020.

He purchased the plane in early 2020.

The defense force rescued the passengers and the pilot.

At the time, Bullard posted a nearly four-minute Facebook live video about the incident.

As he stood on the wing of the downed aircraft, he explained that he was traveling with his son, Timothy Ferguson; one of the pastors from his church, Reverend LaTroy Russell; and Russell’s daughter, who was a medical student.

“We were going to Nassau so we can go to our families and get back,” he recounted to the camera and live audience who offered prayers and thanks that the passengers were safe.

“But guess what — on our way going, after takeoff, we cleared to altitude, but I observed that we were not climbing and we lost engine pressure. So, one of the things we did — I must [say] as I’m doing this video, to let you know as a minister of the gospel why it is important to ask God to order your steps.

“I said to my pastor here: ‘Pray that God gives us a safe flight’ and we had a prayer in the plane this morning.

“And for that purpose, we were losing power and we tried to head back to the runway, but we end up — because of the altitude, and not enough altitude — we were able to put this airplane in the swamp, a beautiful area in Abaco.

“While we are waiting for BASRA (the Bahamas Air Sea Rescue Association), waiting for the helicopter to come and get us, thank you for the calls — all of you who heard [about] it and for your prayers.”

Bullard continued: “I just want to say to you: always put God first; pray. When the Bible says ‘in all your ways acknowledge Christ and he will direct your path’, do that.

“We are right here talking and having fun and giving God thanks.”

He said the video was not to “show off” but to show that “God is real; if you serve him, if you put him first, he will protect you in troubled times”.