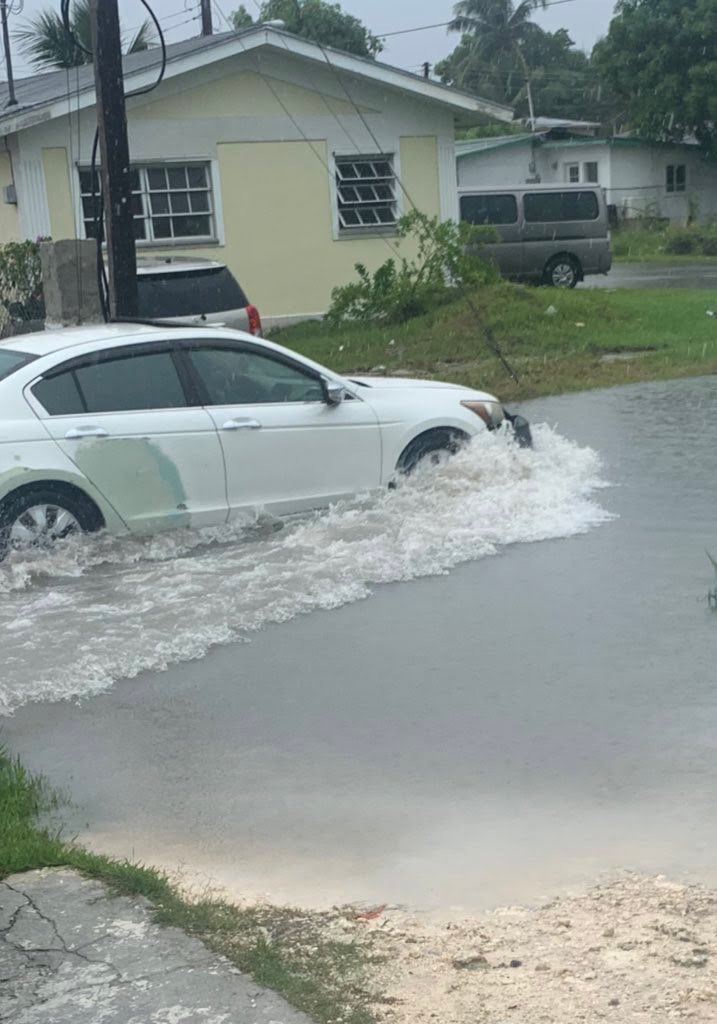 A vehicle attempting to wade through flood water in Pinewood Gardens.

NASSAU, BAHAMAS — After days of continuous rain leading to flooding in several areas on New Providence, longtime residents are relenting that while they know how to cope with the challenges, there seems to be no political will to address the issue.

The usual areas prone to flooding, including Pinewood Gardens and parts of South Beach, have been experiencing sometimes knee-deep water accumulation over since last Friday, as two different weather systems move through the Atlantic Basin.

One Pinewood resident, who said he has been living in the area all of his life, said while the water outside his home was beginning to dry up yesterday, the on and off raining, made it that much harder for him to leave his home.

Anthony Darville noted however that after years of dealing with the matter, it remains an ongoing coping process which is now “typically the norm”.

Darville said there’s not much he can do about it and he has no intentions to move.

Another resident, who said she has been living in the area for 30-years urged the government to do more the rectify the matter.

“We really need help with the drain system,” she said.

“It’s been going on for so many years.

“I really hope we could get some change in the area soon.”

On Tuesday, Minister of Public Works Desmond Bannister underscored the widespread impact of climate change on the flooding in the area, despite government efforts to dig deeper drains.

“It’s very important for all of us to understand that climate change is impacting us really seriously.

“This last year the Ministry of Works has deepened all of those wells to 250 feet, but because of climate change we’ve had rising tides.”

Bannister noted that in his constituency in Bel Air on Turtle Drive, there has been flooding even though wells have been doubled.

“We have to have new innovative ways to be able to deal with this challenge,” he said

He added that his ministry was expected to present new ideas to Cabinet on Tuesday about innovative ways that worked in other countries to see how best they would work in The Bahamas.

“But wells actually backfire when we have high tides.

“Water comes out of wells and come into communities.

“Even as we dig deeper wells, we have to go to more complex and sophisticated solutions and that’s a challenge.”

Residents in South Beach also experienced significant flooding over the past few days, with some indicating that said water had come into their homes.

Larry Moxey said he spent his Sunday trying to mop out ankle-deep water from his home.

“I understand that there’s nothing anyone can do anything about the flooding per se, but the people with the contacts and the government representatives in the area have been doing a poor job with the maintenance of drains.

“The maintenance will not get rid of the tide rising but it will get rid of standing water, which usually becomes a health concern due to garbage, mud, and fecal matter mixing with floodwater.”

He noted however that while he doesn’t see a real fix to the issue anytime soon, he will stay prepared for whenever it rains to mop water out of his home.