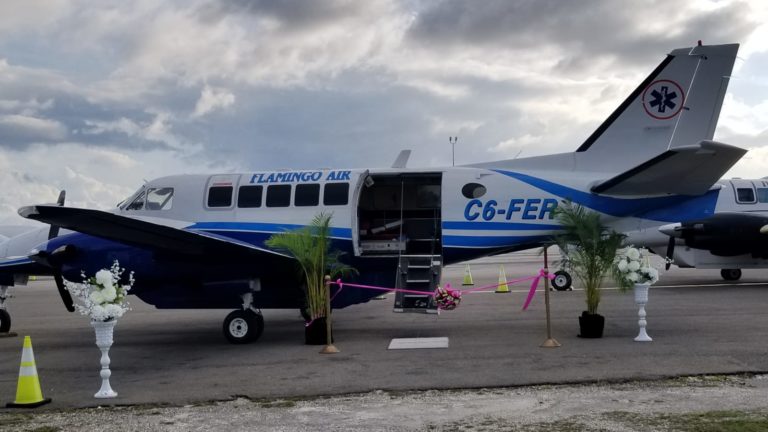 Flamingo Air launched a $900,000 Turbo Prop Jet set to carry both nurses’ aides and doctors aides in what will be the company’s first ever air ambulance.

The new aircraft is one of a few Bahamian owned/operated medical emergency aircraft in the country, according to the Minister of Tourism and Aviation Dionisio D’Aguilar.

“This is a part of our natural progression to first world status,” said Flamingo Air Chief Executive Officer (CEO) and Director of Operations Captain Raymond Meadows.

According to Meadows, the decision to expand the charter line into the new arena was made executively, by identifying a demand.

“We found out there was only one licensed operator that could provide services from the medical community,” he said.

“There’s been times when patients would call and they have to wait for hours.

“The new medical prop jet will travel to every Family Island.”

The tourism minister applauded the new service – a partnership between Meadows and Captain Vincent Colebrooke.

Flamingo Air was established in Freeport Grand Bahama back in 1997, with a staff of 70 and a five-seater Piper Aztec aircraft.

D’Aguilar said the new aircraft also represents an evolution for the country.

“This is excellent for Tourism because it gives the island destinations something to offer,” said D’Aguilar.

“God forbids something happens when you’re on a Family Island. There’s a fast efficient well-established company you can call upon to pick you up.

“Usually, they stabilize you for a while until they are able to get the nurse or doctor on the island to take you to New Providence.”