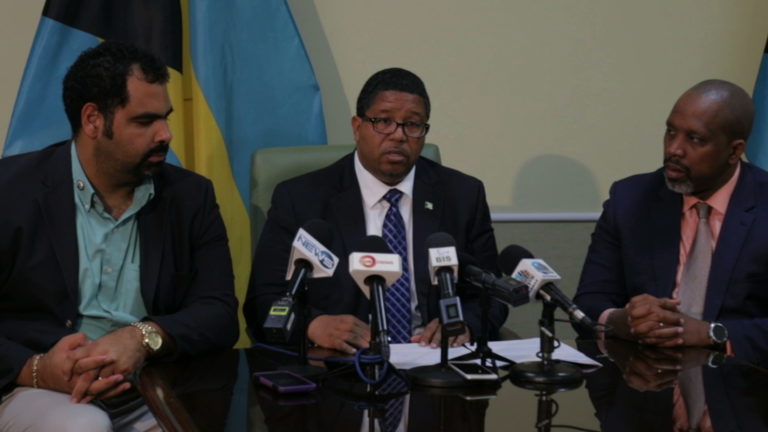 The government has put itself on a self-imposed deadline of three years to reduce the country’s fiscal deficit from 5.8 per cent to no more than 0.5 per cent, according to Finance Minister Peter Turnquest.

At a press conference to announce the government’s Fiscal Responsibility Bill, Turnquest said, the legislation – if passed – will set rules for the way the government spends and accounts for the people’s money, including pre-election spending.

“It is a forward-looking bill intended to reshape the culture of public accountability,” Turnquest said.

“Doing so with legislation means it will commit all future governments and not just this administration. This is a built-in safeguard to ensure continuity, sustainability, and commitment to fiscal discipline. I cannot emphasize enough the importance of this legislation.

“Once passed, it will subject this government and all successive governments, to new standards of public accountability and public sector financial management. And perhaps, more importantly, from the public’s point of view, it will empower civil society and the Parliament to participate in the system of accountability in a robust and comprehensive way.

“To give you an idea of how this works in the new law, it will establish an independent five-member Fiscal Responsibility Council, comprised of civil society professionals, with specific areas of expertise in law, business, economics, accounting and finance.”

“Simply put, the proposed fiscal responsibility legislation reinforces transparency and responsibility in the management of the fiscal finances, and strategically enjoins the participation of Parliament and the people, in holding the Government accountable for achieving its fiscal targets and objectives.”

Turnquest said after the law’s implementation, the government would be required to reduce its debt to gross domestic product (GDP) ratio to a maximum of 50 per cent  GDP over time. It is currently 58%.

“If we let our debt levels grow at an unchecked pace, then we run the risk of effectively leaving the bill on our children to pay off. No government should have the power to saddle future generations with burdensome debt, dooming them to a diminished standard of living. We must start taking the necessary steps to pay our bills up front and contain the growth of our national debt,” he said.

“After the law’s implementation, the government would have three years to lower the fiscal balance from a deficit of 5.8 per cent of GDP recorded in last fiscal year … to no more than 0.5 per cent by 2021/2022.  It means the government has to live within its means.

“We can no longer continue to put the country’s bills on a virtual credit card and continue to have expenditure outpace the revenue on a consistent basis. The proposed law sets a cap on the deficit.  Every year, the government will have to abide by this limit when it designs its national budget.”

The public can find information regarding the legislation on the Ministry of Finance Facebook page, on the Government’s website: www.bahamas.gov.bs and through traditional media outlets. The draft Bill is available for download starting yesterday (Monday), and the public can submit comments to fiscalresponsibility@bahamas.gov.bs.