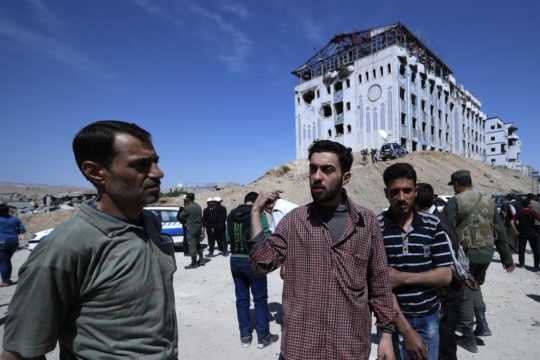 In this Monday, April 16, 2018 photo, Kahled Mahmoud Nuseir, 25, center, who lost his wife, Fatmeh Karout nine months pregnant and daughters Qama 18 months and Nour two and half years, during the alleged chemical weapons attack occurred speaks during an interview with the Associated Press in front of a hospital that locals referred as Point One, background, just meters away from where in the town of Douma, the site of a suspected chemical weapons attack, near Damascus, Syria. The survivors blamed the attack on the Army of Islam, the powerful rebel group that controlled the town before it was taken over by Syrian government forces this week, although they did not offer evidence to back up their claims. (AP Photo/Hassan Ammar)

BEIRUT (AP) — Residents of the Syrian town of Douma were packed into underground shelters amid bombardment when the gas began to spread. Suddenly, panic ensued.

As shouts of “chlorine, chlorine!” rang out, some ran into the night and fainted in the street. Others climbed to rooftops, hoping they’d be safer rising above the gas. Dozens didn’t make it out at all, some stumbling on stairwells, out of breath, where they were later found dead.

The bodies were still there the next morning, strewn around the buildings, including toddlers and young children.

Much about the April 7 suspected chemical attack in Douma, just east of Damascus, remains unknown, including the exact death toll, because of the lack of an independent investigation.

International chemical weapons inspectors were said to have entered the town on Tuesday, 10 days after the attack, but the Syrian government said Wednesday that only an advance security team had entered, amid U.S. accusations that Syria and its ally Russia were blocking their entry to cover up evidence.

The Associated Press spoke to rescuers, medics and numerous residents of Douma for their accounts of what took place. Some were reached in rebel-held areas in northern Syria where they were evacuated after the attack, while others were still in Douma.

They spoke of at least two buildings with people sheltering in the basements that were overwhelmed with gas so strong that it was hard to breathe hundreds of meters (yards) away.

More than 40 people were killed, many of them children, according to medics and opposition activists in the town. The World Health Organization said an estimated 500 patients exhibited symptoms consistent with exposure to toxic chemicals, including respiratory failure.

It was hardly the first chemical attack in Syria’s civil war , now more than seven years old. The U.N.-mandated Independent International Commission on Syria has documented more than 30 chemical attacks in Syria between 2013 and the end of 2017 — at least 25 of them carried out by the Syrian military, the commission says. For the rest, it had insufficient evidence to determine the perpetrator. Most involved chlorine gas, usually causing only a few injuries.

But in this case, it appeared the gas hit dozens of people crammed into confined spaces, huddling away from the bombs outside. The U.S. and France say they have evidence the Syrian government carried out the April 7 strike, while Syria and Russia have denied any gas attack even took place.

An AP team visited the site on a Syrian government-organized tour Monday, including a two-room underground shelter where one resident said 47 people were killed, including his pregnant wife and two young daughters.

A strange smell lingered, nine days after the attack. The floors of the shelter were covered with carpets and pillows were lined up against a wall. There were no signs of blood stains.

A STRANGE SMELL, THEN PEOPLE RUNNING AND SCREAMING

There had been bombings going on all day, and in the evening, a heavy volley of rockets hit, dozens within 10 minutes, said Ahmed, a 20-year-old medic.

After the rocket fire subsided, he and his team moved in to check for wounded. Nearing the site, they encountered a powerful smell, then saw people running and screaming, “Chlorine! Chlorine!”

Ahmed ran into the building, trying to reach the shelter. He didn’t make it far. He saw two bodies, a man and a woman, but he couldn’t go further. His eyes swollen from the fumes, he struggled to breathe. Everywhere was the overpowering smell of chlorine, he said, speaking on condition he be identified only by his first name out of fear for his safety and that of his family.

He rushed to a nearby medical center, where hundreds were crowded, many gasping for breath. Some had fainted. After washing his face and recovering, he joined other medics and went back to the attack site, but the gas was still too strong to get close. Instead they went back and forth helping those who had managed to stagger out get to the medical center.

Soon after the attack, Ahmed was among thousands evacuated from Douma as the town surrendered to government forces.

He believes the attack was clearly carried out by Syrian government forces. “It was like an earthquake,” he said, speaking to the AP from northern Syria. “The town was facing an earthquake.”

Men and women were preparing to perform the sunset Muslim prayers in an underground shelter when an overpowering smell started spreading.

Khaled Nuseir was in the two-room shelter with 51 other people when the fumes hit. He ran to a nearby clinic, calling for paramedics to help, but fainted in the clinic.

The 25-year-old vegetable vendor said he woke up some time later to people putting vinegar and water on his face. He ran back to the shelter where he found his wife and two daughters dead, white foam covering their mouths.

His wife, Fatmeh Qarout, was nine months pregnant. His daughters, Qamar — Arabic for moon — and Nour — Arabic for light — were 18 months and 2 ½ years old. He said only five people in the shelter survived.

The next morning, medics came and took the bodies and buried them in a mass grave near the town’s zoo.

Nuseir said a cylinder was found leaking gas. He said it didn’t appear that it was dropped from the air because it still looked intact. “There was no sound of explosion,” he said, speaking to the AP in Douma, which is now in government hands.

He and two other residents accused the rebel Army of Islam, which controlled Douma until the militants’ surrendered it, of carrying out the attack. As they spoke, government troops were nearby, but out of earshot.

“I lost my children,” Nuseir said. “If we are standing here and something falls from an aircraft, doesn’t it explode? The cylinder was intact when we found it and it was leaking.”

“NOTHING SAVED THEM. THEY ALL LOST THEIR LIVES.”

Abdullah Abu Hamam tried to reach the site of the attack that night but the bombardment was too strong. He got there the next morning. Even 12 hours later, the gas was too powerful for him to venture into the underground shelters.

Still, he found bodies on all the upper floors. It was clear that when the gas hit, some in the shelters ran upstairs, trying to get to the rooftops.

“They knew that if they climbed up, they might be saved,” he said. “We found them on the doorstep, killed. They didn’t even make it to the upper floors. …They fell on the stairs, women and children, and even some men.”

Abu Humam took video footage that showed one apartment with at least a dozen bodies, including at least seven toddlers and young children. None had any wounds, and one woman in the footage appeared to have foam around her mouth

“Some were in the bathroom and were trying to wash, but nothing saved them. They all lost their lives,” Abu Humam said, speaking from the rebel-held town of al-Bab in northern Syria.

This article was written by SARAH EL DEEB. Associated Press writer Bassem Mroue in Douma, Syria, contributed to this report.

Since Syria and Russia are presenting witness testimonies from Douma who claim no signs of chemical attack, could the AP, who spoke with witnesses of the chemical attack, share more details, including photos or video footage? Any chance the world could see the video of dead victims filmed by Abu Humam, as noted in the article above? With the U.S. not providing details of proof of Assad’s responsibility for this event, and the only visual evidence the world is seeing being the hospital images, it is indeed difficult to be sure of the facts of this incident.