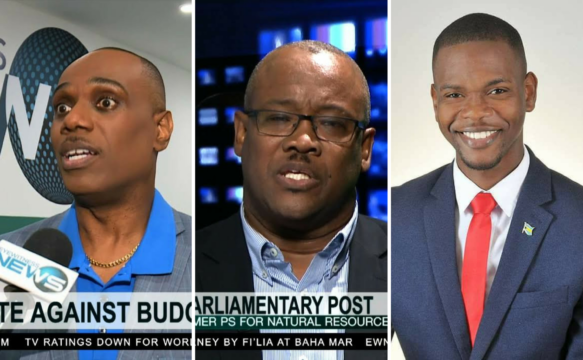 The trio was fired after they voted ‘no,’ on the proposed increase to value-added tax (VAT) following the wrap up of the 2018-2019 Budget debate.

Despite their efforts to stop the tax amendment and implementation, the VAT Act 2018 passed in the Lower Chamber early Tuesday morning.

Hours later, the prime minister called private meetings with Travis Robinson, Member of Parliament (MP) for Bain and Grants Town, who was also Parliamentary Secretary within the Ministry of Tourism. Golden Isles MP Vaughn Miller, who also held a Parliamentary Secretary position within the Ministry of Social Services and Urban Development and Frederick McAlpine, MP for Pineridge and former Chairman of the Hotel Corporation also had private meetings.

The trio was handed dismissal letters which took immediate effect.

Robinson was the first to be let go.

He provided Eyewitness News with exclusive rights to publish his dismissal letter.

While he withheld comment on the entire ordeal, he revealed, “I have written to the Speaker of the House of Assembly to bring a response to today’s incident during the next sitting of the house next week Wednesday.”

Meantime, McAlpine – who was axed from the hotel corporation – told Eyewitness News that he was unmoved by the prime minister’s decision.

“I’m fine with it. I made a decision to vote against VAT at 12 per cent and if I had to do it again, I would,” asserted McAlpine.

When the government introduced its intent to increase VAT by 67 per cent, many touted that the Minnis administration was out of touch with the economic reality of the average Bahamian.

McAlpine maintained that this is the main reason that he voted ‘no.’

“The demographics of my constituency – upper, middle and lower class – is a demographic representing most constituencies in The Bahamas. People must recognize that 12 per cent is really high during hardship when a lot of people are working only two or three days, while others are not working at all,” he said.

“The economy has not grown enough, I feel, for us to have gone to 12 per cent VAT at this time.”

Tuesday’s firings were carried out based on the Westminster system, which indicates that Cabinet ministers – junior or senior – must publicly support the policy of government, regardless of any private reservations.

Speculation arose however, when many questioned the validity of firing McAlpine who held a chairman’s position – a post which is not regulated by the Westminster system.

The move led some to believe that the nation’s leader axed McAlpine from his chairman seat based on a personal gripe that he voted against government’s proposed policy.

Regardless of the prime minister’s decision, McAlpine – who traveled home to Grand Bahama just hours after he was fired – was welcomed by a large crowd of Pineridge constituents who cheered as he arrived at the Grand Bahama International Airport Tuesday evening, bringing him to tears.

Miller, in an exclusive interview with Eyewitness News Tuesday night, revealed that he does not regret his decision to vote against VAT and confirmed that his actions were done in an effort to stand up for Bahamian people.

Reece Chipman, Member of Parliament for Centerville, was the fourth FNM parliamentarian to vote against VAT.

He said he knows the feeling of being fired publicly by the prime minister all too well.

The Centreville MP told Eyewitness News he held no reservations when he voted ‘no,’ Tuesday morning, as he had nothing to lose.

He maintained that his colleagues were blindsided by the tax hike.

“The prime minister has a right to fire whoever he wants to fire when he wants to hire them and for whatever reason,” said Chipman.

“However, it sends a certain message. It sends a message that the person has done something that they shouldn’t have done or that they are just incapable. So, the message of incompetence or integrity challenges can have an impact. That’s not a good message when the firing is politically motivated because sometimes it doesn’t even measure up to the character of who the person really is.”

Both McAlpine and Chipman confirmed that despite being reprimanded by the nation’s leader, their commitment to the party remains firm.

“I am a member of the FNM an until the party or the leader chooses otherwise, I will remain a faithful member of the party. It’s a house that I built,” asserted McAlpine.

“My relationship with the party is strong. I think the FNM base would be very proud of us today because this was the same type of independence Sir Cecil Wallace-Whitfield would have stood on when he was a part of the Dissident 8,” shared Chipman.

“So, I think if we continue to understand how important democracy is to the future of this country, then we start to appreciate that these sorts of things happen. But it’s in the best interest of the people.”