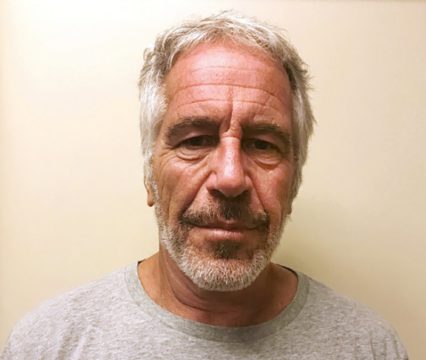 This March 28, 2017, file photo, provided by the New York State Sex Offender Registry shows Jeffrey Epstein. A judge denied bail for jailed financier Jeffrey Epstein on sex trafficking charges Thursday, July 18, 2019, saying the danger to the community that would result if the jet-setting defendant was free formed the "heart of this decision." (New York State Sex Offender Registry via AP)

NEW YORK (AP) — Wealthy financier Jeffrey Epstein was found on the floor of his jail cell with bruises on his neck early this week while awaiting trial on sex-trafficking charges, a person familiar with the matter said Thursday.

It was not clear whether the injuries were self-inflicted or from an assault, said the person, who was not authorized to discuss the case and spoke to The Associated Press on condition of anonymity.

Epstein, 66, was treated and, according to the U.S. Bureau of Prisons, remains in custody at the federal Metropolitan Correctional Center in New York City. Jail records obtained by the AP show no indication he was taken to a hospital.

In a statement, the bureau gave no other details and would not comment on Epstein’s condition. An Epstein lawyer had no immediate response.

It was not clear whether Epstein had any cellmates or was being held by himself. The jail is famous for its tight security and notorious inmates, who have included terrorists, Wall Street schemers and, until recently, Mexican drug lord Joaquin “El Chapo” Guzman.

A lawyer for inmate Nicholas Tartaglione denied local news reports on Thursday that his client was a suspect in a possible assault on the financier. Tartaglione is a former suburban New York police officer awaiting trial on charges he was involved in the kidnapping and killing of four men in 2016.

The attorney, Bruce Barket, suggested that the allegations were leaked by someone “trying to embarrass Epstein and cast some shade on Nick.”

Epstein has been accused of sexually abusing dozens of underage girls in the early 2000s. A judge denied him bail last week, ruling that he might flee the country if released. The judge also said Epstein is a danger to the public because of his “uncontrollable” urges to engage in sexual conduct with underage girls.

Notorious inmates — and those accused of sex crimes against children — are often given extra protection against attacks from other prisoners. But it was not immediately clear what precautions, if any, were taken in Epstein’s case.

“It would have been an extremely poor decision to cell him with any other inmate. He’s too high-profile, a confirmed sex offender of underage females and suspected of human trafficking,” said Cameron Lindsay, a retired warden who ran three federal lockups. “In the subculture of jails and prisons, it’s a badge of honor to take a guy out like that.”

Jail officials would have had no reason to put him under closer supervision against suicide unless he seemed suicidal when he arrived, Lindsay said.

Epstein was indicted on federal charges in New York this month more than a decade after he secretly struck a deal with federal prosecutors in Florida to dispose of similar charges of sex trafficking. He pleaded guilty in 2008 to soliciting a minor for prostitution and served 13 months behind bars.

Federal prosecutors in New York reopened the probe after investigative reporting by The Miami Herald stirred outrage over the plea bargain.

Epstein’s lawyers said he hasn’t had any illicit contact with underage girls since serving his sentence in Florida. They said the current charges are improper because the government is reneging on the deal not to prosecute him.

U.S. Labor Secretary Alexander Acosta resigned this month after coming under fire for overseeing that deal when he was U.S. attorney in Miami.