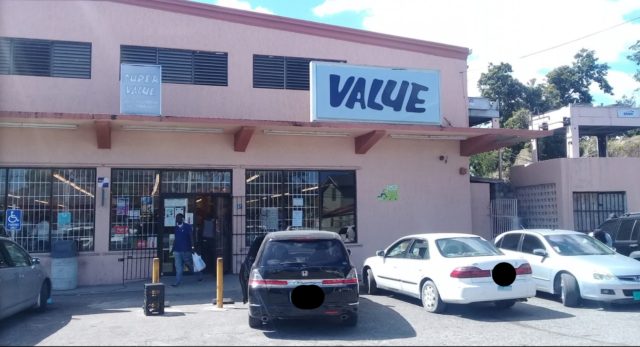 NASSAU, BAHAMAS – Two voice notes that made the rounds on social media Sunday was enough evidence to describe the fear that gripped employees and persons shopping at Super Value when the food store was robbed early Sunday morning.

According to police reports, shortly after 8:00a.m., an armed man entered a major food store situated at East Street and Robinson Road, held employees at bay, and robbed the establishment of cash before making good his escape.

Police said no injuries were reported and investigations are ongoing.

Meanwhile, two voice notes that circulated on the What’s App social media platform on Sunday were those of two persons who recalled yesterday’s brazen robbery at the Super Value location that some still refer to as Portion Control.

In one of the voice notes, a female alleged that the cashiers ‘threw’ the money at the robber and ran out of the store. She further alleged that at least 30 employees ran into one of the food store’s coolers, while others on the outside were trying to get in.

“We only heard bamming and we thought it was the robber trying to get in, but the Lord was with us this morning,” the female said in the voice note. “When he [the robber] had that shop held up I was in there praying and Lord I was shaking, oh God I was shaking.”

Another voice note of a female shopper said she was wrapping up her shopping when she reportedly heard screams and saw cashiers running.

“This morning I never shook so much in my entire life. I am still shaking,” the customer said in the voice note.

“A Defence Force Officer was in there [in the cooler] with his baby in his hand and he was pari [paranoid] and he was peeping out [the cooler] and asking me if they were gone.

“When I peeped through the cooler glass, this old man and woman was standing up in the middle of shop trying to call the police. I said ‘miss, you’ll ain’t hear this place getting rob, eh?’

“They said they were calling the police but I said, ‘miss you have to hide’. This time she have an old ancient phone and the man who she gave the phone to could not work the phone and he said, ‘miss this is not even an Android [phone]’ and I said Lord, give me the phone miss, let me call the police.

“Listen to me, fright is a serious thing, believe you me. I can’t believe I was somewhere that actually got robbed and I actually saw the gun,” the female customer said in the voice note.

Up to press time last night Super Value’s CEO, Rupert Roberts, could not be reached for comment.

This latest robbery comes on the heels of a break-in at Super Value on Baillou Hill Road and Poinciana Avenue on June 27.  Authorities said once officers assessed the store, they discovered that the culprits had cut a hole in the roof. The bandits lowered themselves through the hole with a rope and subsequently escaped on a tower of supermarket trollies by stacking a little over one dozen trollies to the roof of the store to make good their escape.