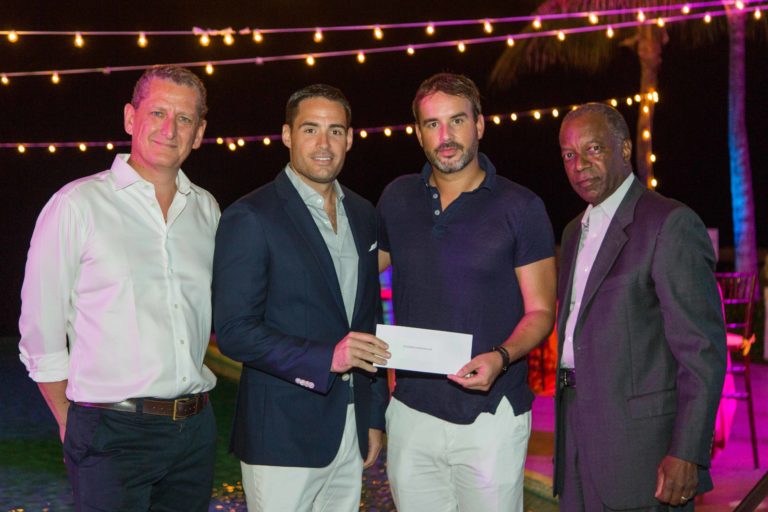 It’s an investment that won’t preserve its capital or reap any monetary dividends but for FC Capital Investments Ltd. (FCCI), a wealth and fund manager providing sophisticated investment solutions to high-net-worth individuals, the $10,000 invested in the Bahamas Feeding Network as a part of its 10th anniversary celebration is money well spent.

“With so many worthy charitable organizations performing valuable services, we wanted to ensure that the organization we chose to partner with as we mark our 10th anniversary would have two major components,” said Alex Murbach, partner and chairman of FCCI, a financial services provider offering wealth planning and management, investment, fund structuring and administration services and counsel.

“We wanted to ensure that proceeds went directly to persons in need and that the administrative costs of the organization were minimal relative to its expenditure. The Bahamas Feeding Network went above and beyond in both regards, meeting the highest standards of efficiency and accountability.”

On a weekly basis the Feeding Network which operates out of a modest converted home called Mosseff House in Fox Hill preps, cooks and distributes between 3,300 to 3,500 plates of food.

“Those meals feed so many households across The Bahamas. Their clients, if you will, are diverse in terms of the size of the family and the ages of household members, still they all have one thing in common – a lack of reliable access to an adequate amount of food to sustain a healthy lifestyle. We felt compelled to support and contribute to those efforts being made, ensuring that people get the sustenance they need to survive,” said Mr. Murbach.

Government statistics peg the level of poverty at nearly 13 per cent of the population, or more than 40,000 persons who go hungry on a daily basis.

Launched in 2013,The Bahamas Feeding Network provides food parcels and prepares and distributes meals through its partner feeding organisations, a network that includes about 100 churches, soup kitchens and other feeding programs.

The brainchild of His Excellency Frank J Crothers, Ambassador of the Sovereign Military Hospitaller Order of St John of Jerusalem of Rhodes and Malta, BFN’s directors are among the leading civic and businesspersons in The Bahamas. In addition to hot meals, the non-profit organization has distributed more than $450,000 in food vouchers to its members since its founding.

“Whether it’s a one-off contribution or a long-term commitment, every gift makes a difference,” said BFN’s executive director Philip Smith, who thanked “strong corporate partners like FC Capital” without whom, he said, they would not be able to ease the pain of hunger.

The cheque was presented during a chic evening celebration at Ocean Club Estates’ Beach Club.

“It is only through contributions we receive that BFN is able to grow its capacity to meet the needs of those men, women and children who experience hunger in The Bahamas.  We continue to press on to one day completely erasing the blight of hunger from society.”

One of BFN’s directors, Sean Moree, a partner at Mckinney Bankroft & Hughes, accepted the cheque on behalf of the organization.

“This donation will go a long way in helping to defray the cost of our weekly food bill of approximately $5,500,” he said. “As the year winds down and more people find themselves in the mood to give we want to encourage them to do so. As we head into Thanksgiving and Christmas, it’s a time to think of those who are less fortunate. We applaud FC Capital Investments Ltd., for this act of generosity.”