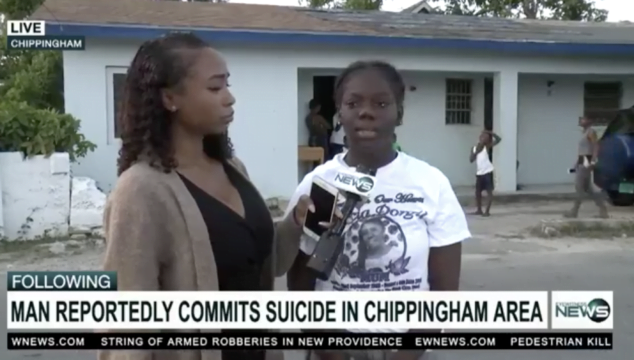 NASSAU, BAHAMAS- Mark Jean Russen, 53, was found by his wife in the closet of their home off Farrington Road, hanging with a rope around his neck.

Authorities were investigating the incident yesterday, but did not wish to rule the incident as a suicide at this stage.

Russen lived with his wife and son in the small house in the Rock Crusher area.

His cousin, Linda Nicholas, who wept as she spoke to Eyewitness News Online, said he took on the role of a father figure for her.

“He was a good guy,” she said, while standing just a few feet away from the home where Russen reportedly his took his life.

“We didn’t see any signs. We didn’t know he was going to do this.

“All we know is when we came home, he was gone.

“Every day he came to check up on me. I saw him as a father figure. I called him dad.”

Nicholas said Russen was an open person, with a kind spirit.

She claimed he was beginning to make significant changes for the betterment of his family, including the purchase of a new car.

“He had just got a new car and he had just renovated his home,” she said.

“I honestly feel robbed. He could’ve said something. He didn’t have to leave us like this.”

As Eyewitness News Online approached the scene of the victim’s home, relatives could be heard crying.

Russen had four children, including a 14-year-old who lived in the family sted.

According to relatives, another child was in college in the Dominican Republic, and two more, lived on their own.

Nicholas said the news will come as a shock to relatives who had yet to learn of the death.

“He made a decision that would leave a mark on us,” she added.

“Today it’s our family, but this could happen to anyone.

“This is why it’s important to tell your loved ones you love them, every day.

Assistant Superintendent Dwight Smith told reporters that police were in preliminary stages of their investigations and further investigations had to be done to conclusively determine the circumstances of the incident.