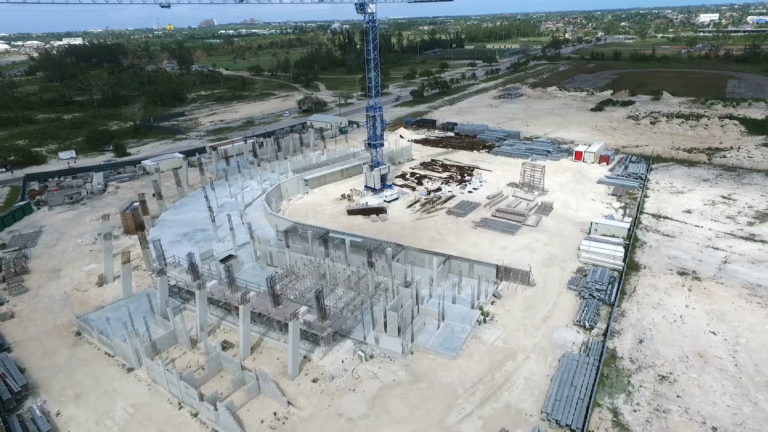 Minister of Youth, Sports and Culture Michael Pintard said Thursday that work on the Andre Rodgers Baseball Stadium opposite Government High School is at a standstill.

Pintard told Eyewitness News Sports that at this point, he and several others, are contemplating whether to continue building on the current structure.

At the start of construction more than 17 months ago, the project was said to cost the Bahamian people about $21 million, and would be complete by the end of 2017. In the first quarter of 2017, Woslee Construction Bahamas ceased work, citing non-payment for months.

“The facts are, prior to the change in government the baseball stadium was on pause. The work had discontinued,” Pintard said.

“When we came in office in May, we worked diligently to ensure we jump started that project. One of the things we did was ask Cabinet for was additional funds to pay outstanding bills, which we got from the Cabinet of The Bahamas. Close to $3 million. So, those particular bills we’re settled. If there are any concerns you can look at me.

“I asked the prime minister to give us an opportunity to consider whether or not we wish to allocate the remaining funds for the complete build out of that facility, or, should we listen to the stakeholders in the baseball community, and explore other options. We were seeking to find out if it made sense to continue with the present facility, which in our estimation, would cost some $25 million, with 12 million already in the ground. Or, do we go back to the original location and create a facility (and) use the additional capital, which we would have used, and build facilities elsewhere in The Bahamas.

“What we wish to do, is present Cabinet with multiple options. If we do build in the original location, with the alignment facing the right way and proper information technology (IT) structure, we would restructure the building opposite Government High into a multipurpose facility.”

Pintard said, in short order, he will speak to all stakeholders and give them a chance to react to what their findings were. He noted that the former administration overlooked several logistical flaws that could substantially decrease the chances of the stadium attracting international competition to The Bahamas.

Back in January, Pintard noted that the “long and short of it is the stadium is in the wrong location”, advising that the original recommendation was that it ought to have been west of Government High, rather than east, which would have given it more space.

The original location, according to the minister, would have also made allowances for existing utilities instead of additional expenditures now in place.

“Major League Baseball (MLB) gave an opinion saying that daytime games will be very difficult, because the sun will be shining in the eyes of the players,” he said.

“So, when people issue statements talking about politics, I’ll tell them that I am not doing the politics thing. I have credited my predecessor for any number of things, but since this has been raised, I have an obligation to lay out all of the facts. So, my next presentation in Parliament will lay out complete details.”