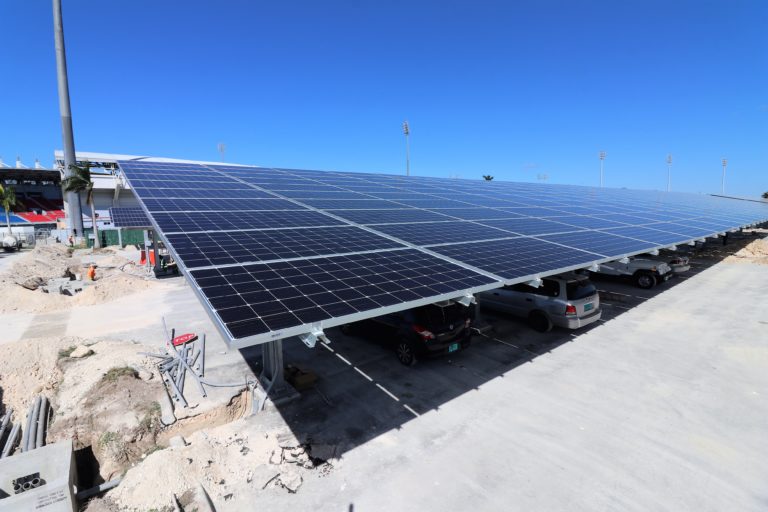 The 900-kilowatt solar car park at the Thomas A. Robinson National Stadium that is slated to be officially opened on March 18, 2019. (BIS Photo/Eric Rose)

NASSAU, BAHAMAS — The overall lack of political will by successive administrations to allow for large-scale renewable systems has cast doubt on the government’s 2030 renewables goal, according to one local provider.

Gilbert told Eyewitness News that while the Davis administration has affirmed its commitment to meet the National Energy Policy’s 30 percent renewable energy penetration by 2030, stakeholders would have to “wait and see” if the goal is met.

“My view is we will just have to wait and see,” said Gilbert.

“Successive governments have talked about it but none have done anything. The bureaucracy is still there.

“We have a client who has a desire to do a one-megawatt system and the feedback is that it can’t be done. That just tells me there is no serious consideration for renewables at this time. That is what I have seen.”

“I’m not going to hold my breath and that’s why focus is on the residential and small commercial systems.

“If we are at 2.5 megawatts of solar collectively in Nassau, that’s a lot.

“If we are at three megawatts now, that’s like just over one percent. It means we have a long way to go in eight years.”

According to Gilbert, the overall “lack of political will” to allow for large-scale solar systems has been the primary impediment to this nation attaining its National Energy Policy goal.

“The only way we are going to get there is with commercial-size solar; the implementation of large-scale systems,” said Gilbert.

“I don’t see the real willpower to do it. I’d be happy to be wrong. It’s a wait-and-see to what the policy will be under this government.

“I think the hesitancy is more of a protection mechanism for BPL (Bahamas Power and Light). If you get to that 30 percent, that’s going to be significant revenue coming out of BPL.”