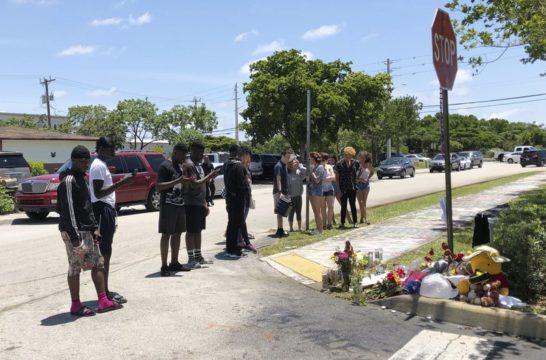 Fans and mourners of rap singer XXXTentacion pause by a memorial, Tuesday, June 19, 2018, outside Riva Motorsports in Deerfield Beach, Fla., where the troubled rapper-singer was killed the day before. The 20-year-old rising star, whose real name is Jahseh Dwayne Onfroy, was shot and killed Monday in Florida in what police called an apparent robbery attempt. (AP Photo/Terry Spencer)

DEERFIELD BEACH, Fla. (AP) — For hours, the fans came in a steady stream to mourn and pay their respects at the spot where rapper XXXTentacion was gunned down, some leaving behind expressions of sympathy along a fence and on the sidewalk.

No arrests have been announced in the shooting of the 20-year-old rapper, who Broward County sheriff’s officials say was ambushed by two suspects as he left an upscale motor sports dealership Monday afternoon in his electric BMW. His attorney, David Bogenschutz, said investigators told him the 20-year-old rapper, who pronounced his stage name “Ex Ex Ex ten-ta-see-YAWN,” had visited a bank shortly before the shooting and possibly withdrew cash to buy a motorcycle.

Myles O’Hara, 17, and Aaron Gavin, 20, sat on the curb, solemnly staring at the ground, mostly ignoring the people who moved past. They said they admired XXXTentacion because he was a local kid who rose from rough circumstances and was making a positive contribution.

“He had some legal allegations before, but the last year he had only been a positive influence on people’s lives, making hit Billboard songs,” O’Hara said. “He has been a kind person. You could look at his face and smile and he was just a normal kid like us … His style is almost hard to explain. He had an angry tone. He meant everything he said, even the most simplistic words. It just came off his tongue like nothing. He was speaking his mind.”

Gavin said unlike other rappers whose songs emphasize buying expensive merchandise, XXXTentacion rapped about his emotions.

Brandon Lang, a 29-year-old magazine owner, said XXXTentacion may have had an angry persona in his performance, but in reality he “did good things,” pointing out that he had come home to perform in an upcoming charity show.

“He had all these mistakes that could have wound up defining him but he didn’t let that happen,” Lang said. “That is why he is connecting to all these kids because these kids are going through a really sad time, a sad world. He taught them how to cope.”

In Los Angeles, hundreds of fans turned Melrose Avenue into a mosh pit in celebration and mourning of XXXTentacion late Tuesday night.

In an impromptu memorial outside a Hollywood bike shop, fans filling the street and dancing on rooftops shouted along with his songs beneath a cloud of pot smoke.

Police closed off the street and let the party grow to nearly 500 people before calling for the crowd to clear out.

The entertainer, who sported dreadlocks and facial tattoos, was a rising star. He notched a No. 1 album in March with his sophomore effort “?″ and had a top 10 hit with “Sad!” but was facing trial on charges that he beat up his pregnant girlfriend.

In an interview this month with the Miami New Times, XXXTentacion described his upbringing, which included seeing his mother infrequently and being raised by friends, family and baby sitters. His mother bought him clothes, phones and other gifts. He said he used violence so she would engage with him.

In one video on social media, he said: “If worse things come to worse, I (expletive) die a tragic death or some (expletive), and I’m not able to see out my dreams, I at least want to know that the kids perceive my message and were able to make something of themselves.”

This article was written by TERRY SPENCER and CURT ANDERSON, Associated Press writers.