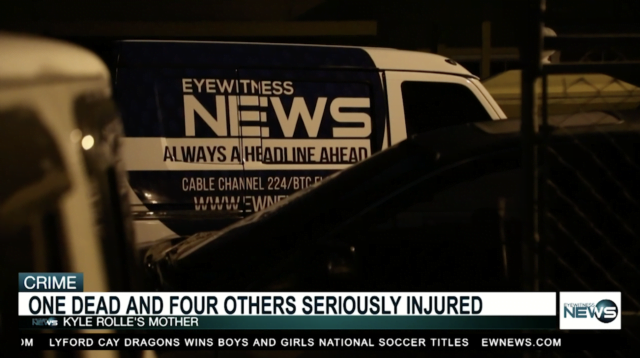 NASSAU, BAHAMAS – The mother of the country’s latest murder victim, Kyle Rolle, 26, told Eyewitness News exclusively that she is still coming to grips with the death of her son who was gunned down on Plantol Street late Monday night.

The shooting death of her son came 24-hours after celebrating Mother’s Day with her four male children.

Rolle, a father of one, was the last of for boys, according to his mother.

The victim’s mother, who did not wish to be named, spoke with Eyewitness News Online just minutes after her son was shot to death.

“Well I’m hurt right now and I don’t know why they did it,” the victim’s mother said.

“It’s just very unreal for me because now crime has just hit my doorstep and so now I know how other parents feel.

Police said Rolle was sitting outside of a residence on Plantol Street, just a few corners south of his family residence on Toote Shop Corner.

Authorities said Rolle was with a group of four other men when they were all approached by a group of men who were armed with handguns.

The assailants reportedly opened fire on the five men, according to police reports.

Rolle was shot dead and the remaining four were rushed to hospital for medical attention.

The victim’s aunt told eyewitness news that she is heartbroken.

“Kyle was just like my very own child. There wasn’t a Sunday that he didn’t get his dinner from me,” the victim’s aunt recalled.

“On Sunday, I brought him dinner, and I looked around the corner where he would usually be and I asked the young men around there for him but he never came to the vehicle.

“I didn’t even get to see him for the last time.”

The victim’s mother, with tears in her eyes, remembered her son as a loving individual.

“He was just a pleasant person. I don’t think he troubled people, but I can’t speak for how he was when he was on the street,” she said.

Rolle’s family is hoping that justice will prevail.

“Something has to be done with the laws in this country to curb this crime,” the victim’s aunt asserted.

Authorities could not confirm if the incident was gang related and was also unable to verify if it might be linked to the two separate double murders which happened last week Wednesday and Thursday.

Rolle’s shooting death pushed the country’s murder count to 33 for the year.