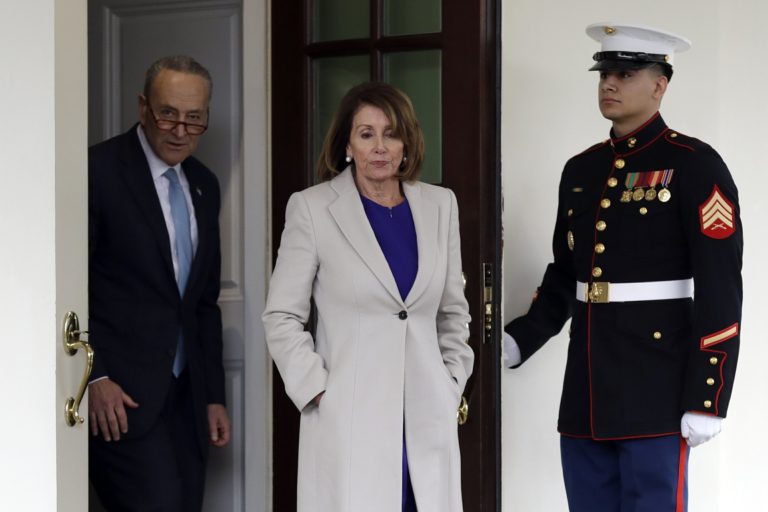 Senate Minority Leader Chuck Schumer of N.Y., and Speaker of the House Nancy Pelosi of Calif., walk from the West Wing to speak to reporters after meeting with President Donald Trump about border security in the Situation Room of the White House, Friday, Jan. 4, 2018, in Washington. (AP Photo/Evan Vucci)

NEW YORK (AP) — Television pundits moved swiftly to correct or challenge President Donald Trump following Tuesday’s Oval Office speech on the proposed border wall, after their networks were the target of an unusual debate over whether they should show him at all.

Some network critics had essentially made the same point in arguing for a television boycott, along with saying the president couldn’t be trusted with the truth. It’s rare, but not unprecedented, for networks to say no to a presidential request for airtime.

But refusing to air Trump’s first Oval Office address as president, in the midst of a government shutdown over the funding fight, would have been seen as a provocative act in itself. So the four major broadcasters and cable news networks showed him, while also airing rebuttals from House Speaker Nancy Pelosi and Senate Minority Leader Chuck Schumer and making provisions of their own to pounce on misstatements.

CNN brought on Daniel Dale, a White House correspondent for the Toronto Star, who has become known for cataloguing Trump misstatements, and he said the president falsely asserted it was the Democrats who had advanced the idea of a steel barrier instead of a wall. NBC’s Chuck Todd made the same point.

“I would say he made a lot of dubious claims,” Todd said.

ABC’s George Stephanopoulos disputed Trump’s claim that the U.S.-Mexico free trade agreement will essentially result in that country paying for the wall. “It has not been approved by Congress and even if it is, there’s no provision there to make Mexico pay for the wall,” Stephanopoulos said.

Shepard Smith conducted a rapid-fire rebuttal of some of the president’s claims during his coverage on the Fox broadcast network. After Trump talked about crimes committed by undocumented immigrants, Smith said, “government statistics show there is less violent crime committed by the undocumented immigrant population than by the general population.” He said that border crossings along the southern border haven been dropping.

“The president said law enforcement professionals have requested the $5.7 billion (for the wall),” Smith said. “It’s he who requested it and he who said he would own the shutdown.”

Smith’s analysis drew an angry response on Twitter from many of Fox News’ conservative fans.

None of the networks used chyrons, or onscreen text, to rebut Trump while he was talking. But CNN and MSNBC used that form of fact-checking after he had finished.

Earlier Tuesday, CNN’s Jim Acosta had confronted Trump aide Kellyanne Conway outside of the White House, asking if she could promise whether Trump would tell the truth. That prompted a bitter exchange between the two.

“Let me get back in your face, ’cause you’re such a smart ass most of the time and I know you want this to go viral,” Conway said.

“The fact-checking came too late for any viewers who turned off their televisions after the president stopped speaking,” said Media Matters’ Matt Gertz. “The networks gave the White House exactly what the president wanted: unhindered access to lie to their audience. He played them, and they let them do it.”

By airing the rebuttal from Pelosi and Schumer, the networks did something that is seldom done for presidential speeches, except for events like the State of the Union address, said former NBC News executive Mark Lukasiewicz, now dean of the Hofstra University communications school. That sets a precedent that may be tough for them to back away from in future events, he said.

Lukasiewicz argued that for the networks, it was an awkward night that would not please either side of the debate over border security.

“The president made no news and no new proposals,” he said. “It is hard to argue this night was about anything other than pure politics — and the networks interrupted programming to accommodate it.”

AP writers Darlene Superville in Washington and Lynn Elber in Los Angeles contributed to this report.