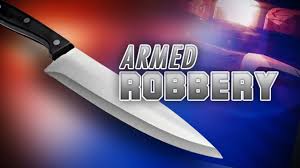 Police officers on the island of Exuma are investigating two armed robberies which occurred Monday.

According to intelligence, the first incident occurred shortly after 4:00 p.m. yesterday when two men, one armed with a knife, entered a liquor store in Mt. Thompson, Exuma. The men held an employee at bay and robbed the establishment of cash before fleeing on foot.

In the second incident, shortly after 4:00 p.m., two men, one armed with a knife, entered a convenience store in Mt. Thompson, Exuma, held an employee at bay and robbed the store of cash before running from the store, making good their escape.

Police are appealing to members of the public, especially those on the island of Exuma, who may have any information in connection with this crime to contact police right away at 919 OR CRIME STOPPERS AT 328-TIPS (8477) (NEW PROVIDENCE) OR 1-242-300-8477 (FAMILY ISLANDS), George Town Police Station at 336-2666.