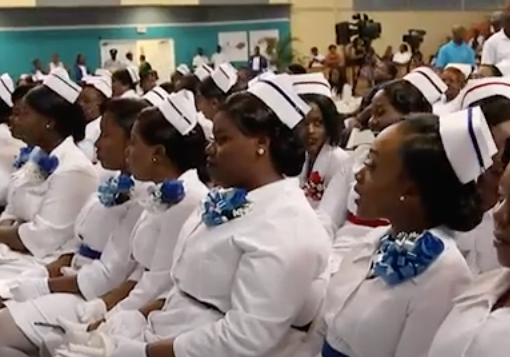 NASSAU, BAHAMAS — The rate of which nurses are being lost from the public healthcare system cannot be sustained, according to Bahamas Nurse Union (BNU) President Amancha William, who stressed that The Bahamas cannot afford a decreased nurse-to-patient ratio amid the ongoing third wave of the coronavirus.

The Bahamas remains in the third wave, though daily cases over the last few days appeared to have somewhat slowed to the low double digits.

“It’s a third wave and we’re really short of staff in PMH,” she told Eyewitness News in recent interview.

“And at the end of the day, we have lost so many nurses.

“…We have lost seasonal nurses.

“And when you see the United States pick up seasonal nurses you are in serious state.

“It’s okay if it’s just the union nurses, but your seasonal nurses, who will guard your junior nurses, are gone, what do you have?

“You have opened a gateway that you will have more job errors because your seasonal nurses will direct your junior nurses.”

According to Williams, in the last couple of months, seven trained nurses resigned from Accident and Emergency, and five from the Intensive Care Unit.

She said: “In each institution we have been losing nurses every month. They’re predominantly going abroad.”

In the last six months, up to 50 nurses have left the public sector to take jobs abroad.

Asked if nurses that left the public sector to go abroad did so for finances, Williams said their departure was also due to a lack of respect from the government.

The government has acknowledged the shortage of nurses in the country.

Last month, Minister of Health Renward Wells has said indicated that the government will seek to re-engage local healthcare professionals to address the shortfall, and consideration is still being given to bringing in additional assistance in the form of foreign nurses.

In April, the health minister made a “clarion calls to all nurses in the community to come forward to assist”.

At the time, Wells said: “We need your help and we appreciate your help.”

But Williams said the government has still not shown the nurses that appreciation through action.

“…In another year or two, we’re going to have no nurses if we keep going like this and we the seasonal nurses are leaving by the bulk.

“So, what are you going to have?

“This is time the time when you ensure your healthcare system is strong.”

The government has committed to providing healthcare workers, who worked on the frontlines of the health sector’s fight against COVID, an honorarium of $5,000