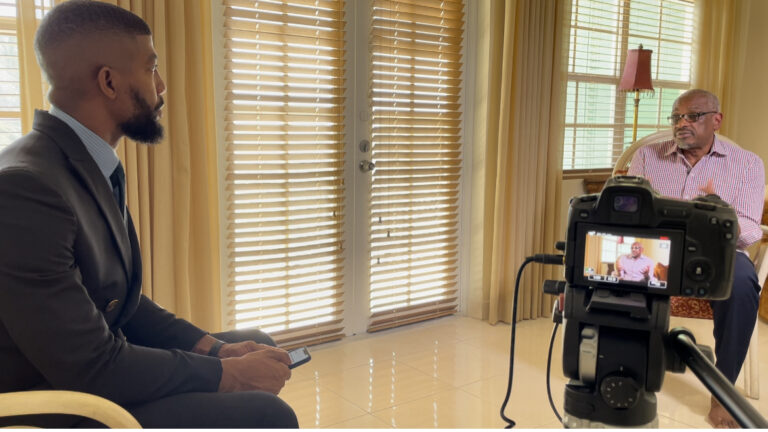 Former Prime Minister Dr Hubert Minnis sits down with our Theodore Sealy to discuss his term in office and his future in the Free National Movement.

NASSAU, BAHAMAS — As the Free National Movement (FNM) prepares for a possible November convention party leader Dr Hubert Minnis remains coy on whether he intends to seek reelection as leader of the party.

The party’s council is expected to meet today for a general meeting.

After the FNM’s crushing defeat at the September 16 polls, the party decided to keep the Killarney MP on as leader of the opposition, though Minnis indicated that he will step aside for new leadership to take the helm at the convention.

However, there has been a growing concern from party insiders that Minnis will not go “without a fight”.

n an exclusive interview with Eyewitness News, Minnis was pressed on what he plans to follow through in stepping down from the leadership.

When pressed on whether he would accept a possible nomination for leadership, Minnis said: Everything is possible. When I make my decisions, once my conscience is clear and I ask my God for guidance, I am happy.”

He insisted that he could not answer whether he would accept the nomination, adding “I don’t know what the party is going to do”.

Minnis also dodged questions on whether he is interested in holding the seat and receiving a nod for the position.

“My interest now is to be involved in building the FNM, ensure that we are a machine that’s ready to take over and a machine with all the infrastructure all the amenities to take this Bahamas to another level,” he said.

The FNM leader added that the party is doing research on its defeat. “We are hiring groupings to determine what were the faults”.

The Progressive Liberal Party (PLP) swept the 2021 General Election, securing 32 out of the 39 seats and unseating the 35-seat Minnis administration.

While some party insiders have suggested the frontrunners are Michael Pintard, Shanendon Cartwright, and Kwasi Thompson, others believe the party needs an alternative option to rebrand the FNM.

Other’s believe that the recent appointment of FNM Senators was the former prime minister’s way of stacking the deck for himself with people who are loyal to him.

The FNM has not held a convention since 2016 when former Long Island MP Loretta Butler-Turner and former Elizabeth MP Dr Duane Sands challenged Minnis for leadership.

He was again challenged in December 2016 in an unprecedented move that shocked the country, with seven members of the party’s parliamentary caucus writing the governor-general advising that they had lost confidence in Minnis and asking that he be replaced as leader.

Sands recently indicated that he has not made a decision on whether to run for leader at its next convention.

Minnis has insisted that the FNM’s parliamentary team will be a strong opposition and a “force to reckon with” despite its small size.

“We may be small, but we will be effective. We will be aggressive and we will do our homework,” he said.

He highlighted that the team has had substantive experience in opposition and as a government.

Asked whether the party can build enough steam and power to return to power after this term, the former prime minister said: “I have no doubt. We have a very very strong team in the senate; young voices, vibrant voices, articulate voices and they speak for the FNM

“They will speak for the Bahamian people. If the government goes off course and tries to go back into a self-centered mode, we will speak.”

He added that the country “will see a machine, that you have never seen before”.