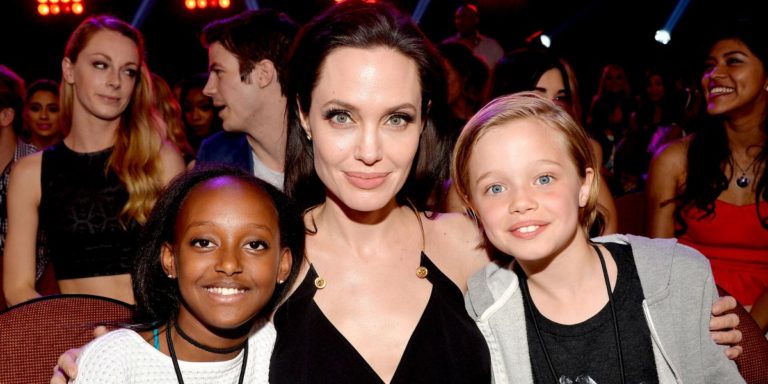 Angelina Jolie with daughters Zahara (left) and Shiloh at the 2015 Nickelodeon Kids' Choice Awards. Her daughter, Zahara was adopted from Ethopia back in 2005 when she was six months old. Photos credit: Nickelodeon.com

Ethiopia is one of the biggest source countries for international adoptions by US citizens, accounting for about 20% of the total.

Celebrities Brad Pitt and Angelina Jolie are among those who have adopted children from Ethiopia.

However, in 2013, a US couple were convicted of killing an adopted Ethiopian girl.

The adoption process in Ethiopia has also faced serious questions with rights groups saying that it was prone to abuse by human traffickers who saw it as lucrative market.

Two years ago, Denmark stopped the adoption of children from Ethiopia.

Lawmakers now say orphans and other vulnerable children should be cared for under locally available support mechanisms in order to protect them.

But some MPs said that the country has insufficient local services to cater for vulnerable children.

Many are also taken to European countries such as Spain, France and Italy.

What next for Ethiopia’s orphans?

Debate over foreign adoptions in Ethiopia has been rife since the 2013, so the country’s ban didn’t come as a major surprise.

The question now is what will happen to the thousands of orphans and vulnerable children who can no longer be adopted?

Parliament says the country’s social services should be able to handle the numbers and more importantly local adoptions are still permitted.

However, adoption is not a big part of Ethiopia’s culture and many orphans find themselves shuttled between relatives or on the streets.

Ethiopia is one of the fastest growing economies in the world, but millions of people live in poverty.

Although there is a fast growing safety net programme to cushion the poorest from the ravages of droughts, critics say the country simply doesn’t have the capacity to deal with the huge number of orphans.

The coordinator of a children’s orphanage in Addis Ababa, who asked not to be named, said that they would find a way to look after the children in the country.

“These are our children. We are already seeing many Ethiopians choosing to sponsor one child or two through their education and other needs.”

“For now things are just up in the air,” she added. “But who knows, it might be reversed and these needy children will find families, here or abroad.”

Always a headline ahead, around the world, Ethopia, global, world news, www.ewnews.com