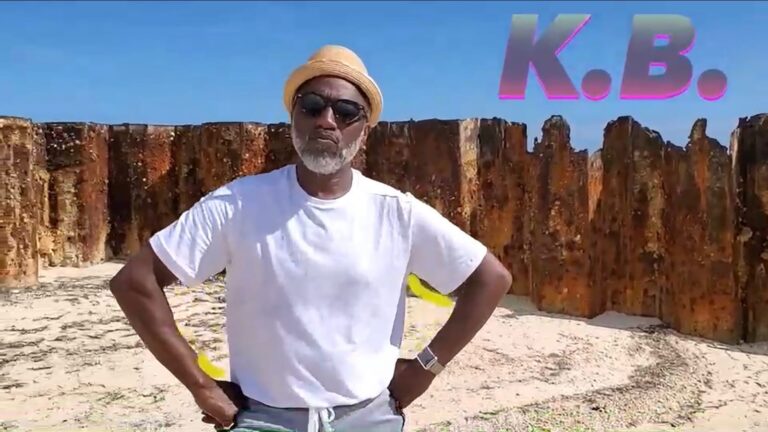 Local songwriter and performer KB on the set of the music video for “Das Why We Savin’ Da Bays”.

FREEPORT, GRAND BAHAMA — Bahamian recording artist and producer Kirkland “KB” Bodie is not relenting in his pursuit to engage his fans and the wider community in discussions on issues impacting the environment. Evidence of this is the release of a new single “Das Why We Savin’ Da Bays”.

Since joining the non-profit environmental group Save the Bays (STB), and even before that, Bodie has written, produced and performed a number of songs aimed at bringing awareness to and fighting unregulated development and environmental degradation in The Bahamas.

This latest song was written by Bodie while he was in Cuba following Hurricane Dorian in September 2019. The artist left The Bahamas for a while after a 15-foot surge destroyed his Grand Bahama home.

While out of the country, the artist read unflattering commentary from back home, which cast a shadow on all the work STB had been doing.

“They were questioning whether it was a political thing, and I knew then and there I had to write a song,” he said. “Save the Bays stands up to the FNM (Free National Movement) and PLP (Progressive Liberal Party).

“As I see it, our first priority is the environment.

“I had to tell the story of what Save the Bays was all about and all the things we have accomplished. Some people seem to think we are not serious or that it’s all about politics. No. We actually care about the environment!”

To date, STB has vocally challenged more than a dozen unsustainable development projects. STB or its community partners have championed six of these to court over various irregularities, and in two cases the court ordered illegal operations to shut down completely.

Bodie continued: “Remember, we took BPC (Bahamas Petroleum Company) to court when no one else would challenge the approval to drill in Bahamian waters.”

Growing up in Eight Mile Rock, Grand Bahama, Bodie admitted, he and his friends weren’t at all interested in protecting the environment, or anything else for that matter.

He lamented: “As I got older, I knew it was better to care for the land than to abuse it. I have always heard the cliché ‘let’s save it for our children’, but if I save it for me, it will automatically be there for future generations.”

As an entertainer, he explained it was important to get these messages to audiences that wouldn’t ordinarily hear them.

“This was a pivot to being more responsible and showing I’m not just a guy who can shake, but also one who could affect change,” he said.

The coronavirus pandemic has slowed the world down. While Bodie has missed all his regularly scheduled live shows, he has been working on writing and producing new material.

“When things get back to whatever is normal, you will see a volume of music being kicked out locally and internationally,” he promised.