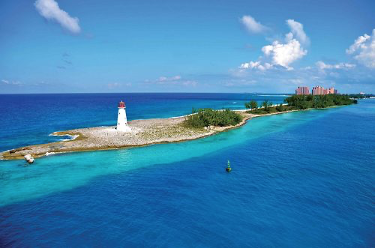 NASSAU, BAHAMAS — A Bahamian entrepreneur yesterday urged Royal Caribbean to publicly indicate whether they have scaled back on their plans for a multi-billion beach club project on Paradise Island.

Toby Smith, principal of Paradise Island Lighthouse & Beach Club company, expressed optimism over a positive resolution to his long-running battle regarding his Crown land lease in an interview with Eyewitness News.

“I would like to know if RCL is going to publicly rescind their application for Crown land which invades over my land,” he said.

“I want to know definitively what their plans are. I have heard it frequently mentioned that they are in negotiations with the government. Negotiating Crown land contained in litigation could be construed as contempt of court. Are they trying to negotiate land that is not contained within the litigation and if that is the case can they publicly concede that they are not trying to invade my beach parcel?”

Deputy Prime Minister and Minister of Tourism, Aviation, and Investment Chester Cooper recently indicated that the government remains in discussions with RCL over the $110 million project proposed for the western portion of Paradise Island, however those discussions do not involve the land which is in dispute.

RCL’s multimillion-dollar project had originally been slated to start in October 2022 with a completion date of May 2022 would have a $1 billion economic impact on the local economy over 10 years. The company had pledged to hire 250 Bahamians for the project’s construction and operations phases. Some of the seven-acre tract leased to Royal Caribbean is included among one of the two Crown Land parcels that Smith claims he holds a valid lease for.

I thought this was resolved since it was supposed to be a new day.