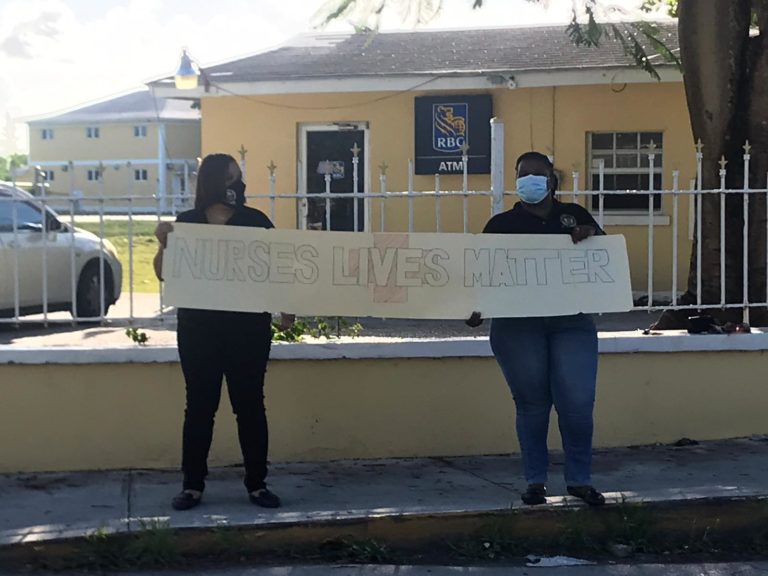 Outside the facility this morning, Williams expressed sadness over the death of staff nurse Bernadette Rolle, a mother-of-two known affectionately as “Bernie”.

She claimed Rolle visited the Princess Margaret Hospital twice for care but was turned away because there were no available beds.

Williams further suggested widespread protest from nurses if their concerns over adequate testing, protective gear and compensation are not addressed.

“Words cannot express the sorrow that we are expressing as we withstand the challenging issues and times as this pandemic plagues our country,” she said.

According to the BNU president, nurse Rolle presented to the Princess Margaret Hospital twice, seeking assistance, but was reportedly sent home.

“We know that she had a comorbidity and we know at this point in time, you don’t send anyone home, especially a nurse,” she said.

“A nurse should have had a bed in ICU, like we do for the other rest of hierarchies.

“She came on the job, she worked, she sacrificed, she was exposed on the job and was left home to self-care for herself, like many of the nurses are doing today.”

Williams said she believes if Rolle was able to have a bed at the hospital where she could be properly treated she may not have died.

“There were no beds, she was sent home,” she said.

Williams insisted that this cannot happen to another nurse, and plead with Bahamians to stay at home.

“This mother has left two children, Lillian and Ethan,” she said.

“After this pandemic who’s going to take care of Lilly and Ethan. We cannot have this happen to no other nurse, we will refuse.”

She further however that there are currently more of her members who have been experiencing challenges.

Williams continued: “We have nurses who are home self-medicating, [experiencing] respiratory distress. Please Bahamas stay home. This is not the partying time. This is serious. We have lost our own. We are begging you, stay at home and hand sanitize, and do what you ought to do as a Bahamian citizen.”

Williams also warned the government that “enough is totally enough”.

“As of today, if things ain’t right, you could assure every nurse in the Commonwealth of The Bahamas will be sitting under a tree as of today,” she said.

“Prime Minister We are tired, minister of health we’re tired.”

The first positive COVID-19 case was reported at SRC on July 25. Health officials reported 23 patients at the SRC had tested positive for the virus earlier this month.

Of the positive cases, 20 individuals had symptoms and counted as clinical inpatients or “hospitalized” case and were in isolation.

The patients were on the Male Ward and were tested after a staff member who worked across three wards at the institution tested positive for the virus.

More than a dozen nurses at the facility called out sick on Thursday after reporting they were experiencing “symptoms”.

Williams has advised that 15 more nurses remain in self-isolation.

She said the BNU was still awaiting the official count of nurses in isolation and the results of several other nurses who tested seven to 10 days ago.

She said: “I am telling the nurses in the Commonwealth of The Bahamas, if there is no PPE and no N95 mask, no boot, no cover for your head, please, do not enter. Sit and wait till the relevant authority come and bring them.

“This is a sad day for the nurses in the Commonwealth of The Bahamas.”

Yesterday, the Ministry of Health confirmed a record five COVID deaths, alongside 93 new cases of the virus.

Of the deaths recorded, four were COVID-19-related.

There have been 11 deaths in the last six days.

During the first wave of the pandemic in The Bahamas, which spanned from mid-March to the end of June, there were 11 deaths — seven men and four women.

Eight of those deaths took place in New Providence, two in Grand Bahama, and one in Bimini.

The ministry said more information regarding the recent deaths and “other epidemiological details” regarding the virus will be presented at a joint press conference on Monday.

If Dr. Kevin Bethel has a treatment recommendation for this virus why isn’t anyone listening, why isn’t anyone seeking him out for help, are we content to let people suffer and die. Are we afraid to try, his remedy seeing that there are no other alternatives?

Start giving nurses a base line dose of hydroxychloroquine with zinc and vitamin D like so many in the world are doing. Ask the Indian doctors here to cinsult with the Indian Minisrty of Health as widespread hydroxychloroqione has been used successfully in India even in the slums

Hope fully there is more to this story than meets the eye.

The Hydroxychloroquine works. Use the drug for God sake. It’s a antimalarial drug used for autoimmune diseases such as Lupus.

Like the African doctor said if she treated 80 patients with it 75 patients got better within days. The ones with underlying health problems that were far gone took longer.