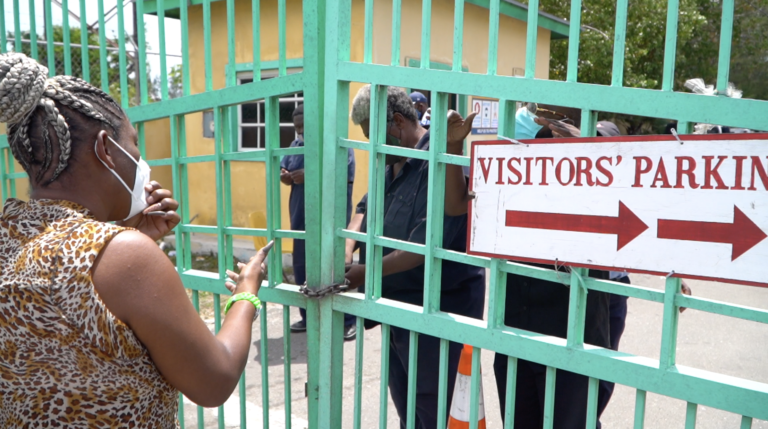 Anxious parents and guardians gather outside Government High School’s gates on May 18, 2021, after learning through social media that a male student was killed and another seriously injured during a stabbing incident.

Lloyd: Teachers and family members of the victims “going through certain dramatic reactions”

NASSAU, BAHAMAS — The survivor of a school stabbing at Government High School (GHS) last month is currently under suicide watch as the incident takes a mental toll on students, teachers and family members, said Minister of Education Jeffrey Lloyd yesterday.

Kenm Paul, a 15-year-old GHS student in the 11th grade, was stabbed to death in the corridor of the school campus, and another male student was also stabbed, following an altercation with two other two students during their lunch break.

Between 200 and 300 grade 11 students, staff and administrators, as well as security personnel, were on the campus at the time to facilitate the sitting of exams.

While he presented to the budget debate in the House of Assembly, Lloyd underscored the ongoing support to students, parents and teachers through psychosocial and other means amidst the challenges of the pandemic.

“This pandemic and Dorian, other unfortunate events in the lives of our associates, our colleagues, do sometimes render them emotionally tortured and in need of our love and support but also professional help.”

He further pointed to the recent incident at the school, noting that he recently visited the families of the young men.

He noted that the young man who survived was the actual target of the attack but was able to escape harm.

“That survivor is under suicide watch because he feels so bad,” Lloyd said.

The pair are reportedly cousins and were close friends.

Two teenagers have since been charged with murder and attempted murder in connection with the stabbing.

“You have two families that are now suffering and there are homeroom teachers who were obviously close to these young men that themselves are going through certain dramatic reactions,” the education minister said.

He said these families have access to help through the ministry’s year-round initiatives, including psychosocial sessions for students, parents and teachers, established hotlines/ social media pages and an established Star Mentoring Programme.

Lloyd insisted that with mental health becoming a topic of great interest around the world, the Ministry of Education has a robust plan to provide assistance.

“I’m happy that many of them do take advantage,” he added.