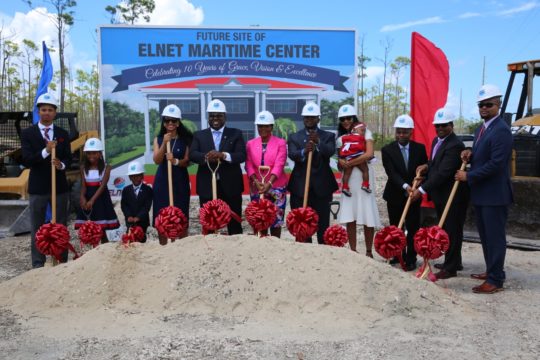 Deputy Prime Minister, K. Peter Turnquest and Minister of State for Grand Bahama, Senator Kwasi Thompson (second and third from right), were among those preparing to till the soil as a part of groundbreaking ceremonies for the new Elnet Maritime Center, located on Queen’s Highway, Freeport, Grand Bahama. CEO of Elnet, Elbert Hepburn is center (fifth from left).

FREEPORT, Grand Bahama – Minister of State in the Office of the Prime Minister, Senator Kwasi Thompson, said both foreign and local investors continue to display confidence in the Grand Bahamian economy by starting new businesses or expanding existing ones.

Minister Thompson, who was the keynote speaker at the groundbreaking ceremony for Elnet Maritime Center on Monday, August 27, 2018, noted that CEO of Elnet Maritime Ltd., Elbert Hepburn is a real example of what the spirit of Grand Bahama represents.

“The government has seen restored investor interest among foreign investors, as well as among Bahamians, right here in Grand Bahama,” added Minister Thompson. “In fact, over the past year or so, there have been a number of new businesses started in Grand Bahama, as well as expansion of existing businesses.

“If there is anyone who says that Grand Bahama is dead, I tell them to open their eyes and they will see,” added Minister Thompson. “I am in no way suggesting that business is booming. I am in no way saying that we are doing all that we can and should do, but what I am saying is that there are Bahamians and other investors who are pushing their way through in Grand Bahama and they ought to be commended for contributing to the kind of economy that we would like to see.”

He noted that by virtue of Grand Bahama’s deep waters, its climate and proximity to the United States and its open geographical path to the rest of the world, Grand Bahama has proven perfect for the maritime industry.   “While we also seek to expand other industries such as tourism, technology and others, we want to continue to capitalize on maritime and ensure that Grand Bahama maintains its status as a major maritime and industrial hub in the region,” he said.

During the construction phase of Elnet’s new Maritime Center, Elnet intends to engage some 125 people through self-contractors.  Post construction, there will be opportunities for 80 to 100 new jobs in Grand Bahama.

Minister Thompson said he was excited to see Bahamian-owned businesses investing further into the local economy.

Minister Thompson said Elnet Maritime, which has been around for over 10 years, is a testament to what Bahamians can achieve through hard work, faith, innovation and dedication, and that innovation and entrepreneurship are key to Grand Bahama’s economy.

Since taking office, Minister Thompson pointed out that the government has committed to creating an environment that is conducive to the creation and growth of small businesses by way of providing funding, training programs and mentorship from other professions.

Deputy Prime Minister and Minister of Finance, the Hon. K. Peter Turnquest also congratulated the CEO of Elnet, and the principals on the success of the business over the past 10 years.

“We know, based upon the history of this company and based upon your vision for Elnet, that this new endeavor will be very successful, and will continue to contribute to this island in a significant way,” said Minister Turnquest.  “This expansion, I believe, demonstrates to Grand Bahama and to The Bahamas that there is life here in Grand Bahama.  As a government, we have intense discussions at least once a week about the future of Grand Bahama and what should be our response as a government and what initiative we should take to help develop this island.”

“The story of Grand Bahama is in the success of entrepreneurship,” said Minister Turnquest. “Bahamians, like Mr. Hepburn and others who have made the decision to invest in their own country. Every day we fight to ensure that Grand Bahama gets the resources and attention that it needs.

“But, in order for the government to be successful, we need the private sector to step up and take its rightful place.

“Through the small business development center that we are developing here, through the Bahamas Development Bank, through BAIC and all of the other entrepreneurial initiatives that we have, as well as the commitment of the government to put its money where its mouth is, there is opportunity, capital and even training for genuine, well-thought-out businesses.”