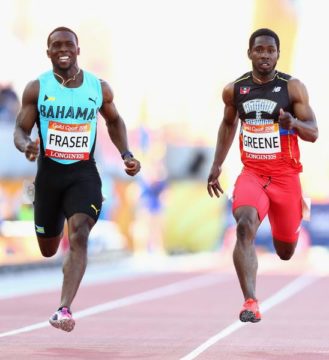 Warren Fraser was one of several Bahamian athletes that turned in strong performances over the weekend.

Several of the country’s premier elite and collegiate track and field athletes turned in exceptional performances over the weekend in meets all around the United States.

Both Warren Fraser and Bianca Stuart competed in the 2018 Torrin Lawrence Memorial in Athens, Georgia.

As for Stuart, she captured a silver medal in the women’s long jump with a mark of 6.66m. Chanice Porter won the event with a leap of 6.75m, while Kate Hall, from Georgia, was third in 6.63m.

Representing Empire Athletics at the Seminole Twilight in Tallahasseee, Florida, Teray Smith captured gold in the men’s 100 in 10.34 seconds.

At the Southeastern Athletic Conference Outdoor Track and Field Championships in Prairie View, Texas, Alexis Gray finished second in the women’s 200 in 23.92 seconds. Charminiqu Hackney, a senior at Alcorn State University, won the race in 23.30 seconds and Euricka Hardy was third in 24.07 seconds. Gray also lined up to run in the 100 but was disqualified for a false start.

At the Arkansas Twilight in Little Rock, Arkansas, Razorbacks Charisma Taylor and Trae Carey finished second and third in their respective events.

Taylor finished second in the women’ triple jump with a leap of 12.41m, while Carey was third in the men’s long jump with 6.95m.