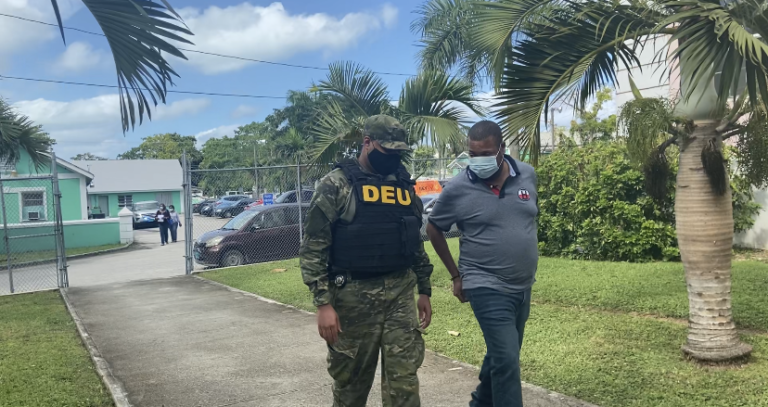 NASSAU, BAHAMAS — An Eleuthera man was arraigned in the Magistrates Court yesterday on possession of cocaine with intent to supply, valuing nearly $1,300.

Martin Luther Percentie, 43, of Colebrooke Street, Harbour Island, appeared before Chief Magistrate Joyann Ferguson-Pratt and was charged with one count of possession of dangerous drugs with intent to supply.

Prosecutors alleged that on November 17, officers acting on information went to Percentie’s home with a search warrant.

While on the inside, officers searched Percentie’s bedroom and discovered a clear plastic wrap on top of the ceiling fan.

Officers also found $8,347.20 which was suspected to be proceeds of crime and confiscated.

As a result of the discovery, Percentie was arrested and interviewed under caution, where he admitted to being in possession of drugs.

He pleaded guilty to the charge.

His attorney, Ian Cargill, asked the court to take into consideration that the Eleutheran, who is a fisherman and farmer by profession, cooperated with police, admitted to the crime and pleaded guilty at the earliest opportunity.

“He is remorseful. He has not wasted the court’s time.”

Cargill also advised the court that Percentie has medical difficulties, including a tumor on his chest, for which he is scheduled for surgery.

Ferguson-Pratt noted, however, that the defendant was found in possession of cocaine valued at $1,300 which is still an “egregious offense”.

“If you break rules, you must be prepared to face them,” she said.

“This is a serious offense and it must be taken lightly.

“Anyone with a condition will go on a straight path rather than pursue a criminal enterprise. This is not acceptable.”

Ferguson-Pratt noted that the court found itself in a quandary over the matter.

She said what was in Percentie’s favor was his taking responsibility early on and his clean record.

He was fined $5,000 or 12 months in prison and the cash confiscated will be forfeited to the Crown.

“I hope it will serve to send a clear message that embarking in a criminal enterprise does not pay,” the chief magistrate said.

“If that’s your lifestyle, I suggest you cease and desist.”