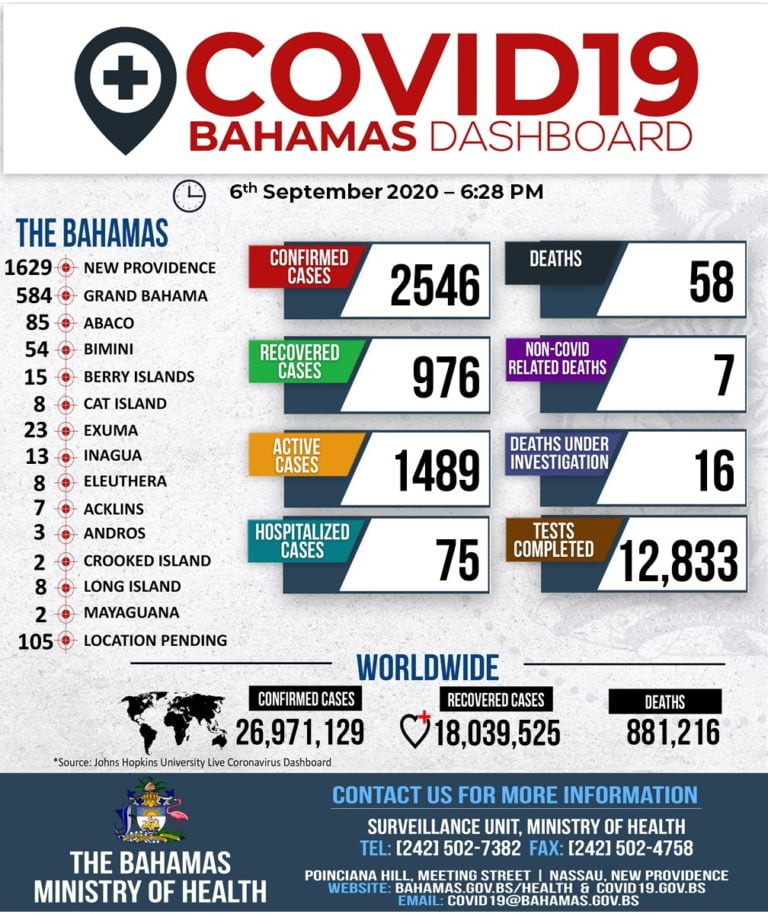 NASSAU, BAHAMAS — There have been 18 coronavirus deaths confirmed in The Bahamas over the past two weeks, propelling the country’s death count to 58.

An additional 16 deaths are under investigation.

The deaths include men and women between the ages of 20 to 99-years-old.

Yesterday, the Ministry of Health confirmed two more deaths in New Providence: an 80-year-old man and a 68-year-old woman.

The ministry said an additional death was under investigation.

On August 28, the Ministry of Health updated its daily dashboard to reflect the number of deaths under investigation, before they could be properly classified.

The number of deaths reflected at the time stood at 40 with 10 deaths under investigation.

Since then, there has been a steady increase in the COVID-19 death toll, with fatalities being confirmed nearly daily.

On August 29, officials confirmed the death of a 63-year old man and a 53-year-old man, along with a 99-year-old man who died on August 26 – all of whom were from New Providence.

On August 31, a 77-year-old man of New Providence died from the virus.

On September 2, the ministry of health confirmed the death of a 58-year-old woman who passed away on August 26.

Three additional deaths were confirmed in Grand Bahama on September 3.

The death of a 53-year-old woman from New Providence on September 4, was confirmed in Saturday’s update.

Health officials confirmed 30 new cases of COVID-19 in The Bahamas on Saturday.

Of the confirmed cases, 23 were on New Providence, three were on Long Island, three were in Exuma and one was on Andros.

An additional 40 new cases were confirmed yesterday – 39 in New Providence, and one with the location still pending.

There were 1,629 confirmed cases of COVID-19 in New Providence, 584 in Grand Bahama, 85 in Abaco, 54 in Bimini, 23 in Exuma, 15 in the Berry Islands, 13 in Inagua, eight in Cat Island, eight in Eleuthera, eight in Long Island, seven in Acklins, three in Andros, two in Crooked Island and two in Mayaguana.