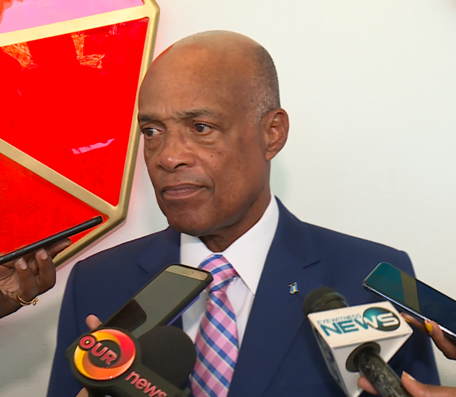 Effective yesterday, Deleveaux has been deployed on a special assignment to the Ministry of Education, Science and Technology to assist with “overall security concerns”, according to his letter dated February 7.

Attorney Wayne Munroe, who now represents the ACP and two other reassigned senior officers told Eyewitness News that Deleveaux still has to meet with Education Minister Jeffrey Lloyd to “find out what the calamity is in the Ministry of Education and decide how to address it”.

The letter incorrectly states the deployment is to the Ministry of Health in its subject line; however, the body correctly references the education ministry.

It confirmed Deleveaux’s current benefits, entitlements and pension will remain the same, adding the senior police officer will play an integral role in the ministry’s executive team.

When asked about the security concerns his ministry may have, Lloyd told Eyewitness News, “Well he wasn’t transferred by me, so I would suspect that you would want to direct that question to whomever made the transfer.”

“You know we are spread over all of these islands and security issues is not a concern to us, but we could use every single minute of help that we could get from every possible resource that is competent,” Lloyd said.

He added that he expects to meet with Deleveaux today regarding the matter.

Assistant Commissioner of Police Clayton Fernander received his letter confirming his reassignment to the Ministry of Health last month.

ACP Kendal Strachan was transferred to the Ministry of Social Services upon his return from forced leave in December.

Both Strachan and Fernander have initiated legal action.

“One may be an incident, two may be a mistake, three is clearly purposefully behavior,” Munroe insisted yesterday.

“There has been some changes from the first ACP to the last two, but from what our experience has been with ACP Fernander, we are still waiting for the written list from the minister of health, and the Minister of Education making himself unavailable, we expect it’s the same thing.”

The three officers in question were also among 10 officers promoted from chief superintendents to the rank of assistant commissioner in the weeks leading up to the 2017 General Election.

At the time, then Mount Moriah candidate Marvin Dames called the promotions a “sham”.

Dames, who now serves as national security minister, maintains to date the decision to reassign the officers is in no way political nor is it seen as a demotion.

But Munroe said the overall optics is a “sign of the general incompetence of the government”.

“These are just a bunch of dunce boys who don’t understand that government is continuous,” he said

“You don’t have a situation where everything that I do is under a government you seek to undo, sensible governments don’t do that.

“This government is demonstrating itself to have no idea about institutions and it is costing the Bahamian public money.

“..Should they not stand down on this, this will be yet something else to cost us a bunch on money.”