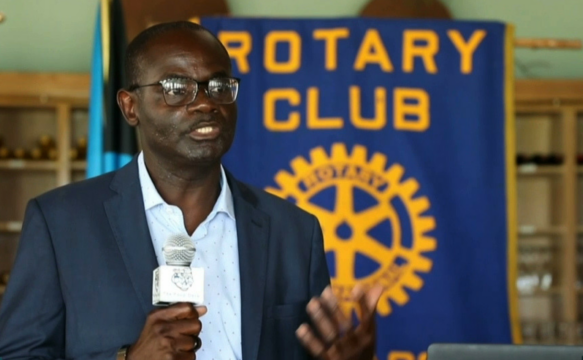 Rupert Pinder, a lecturer at the University of The Bahamas (UB) questioned the government’s rationale behind the 4.5 per cent increase in value-added tax and called for clarity on the exemptions, particularly medication Thursday.

His comments came at a Rotarian luncheon Thursday, where he also foreshadowed price gouging as a result of the new tax regime.

“I’m seeing a difference within the food stores. I suspect some businesses are hedging their bed because of the uncertainty of increasing prices in anticipation of what may happen,” Pinder warned.

“It’s a win win for businesses.

“One of the things I’m still grappling with is, we increased the VAT from 7.5 per cent to 12 per cent and then we introduce a number of exemptions and I’m not sure what was the intent there.

“Politically it sounds good, but then the question is,  let’s just say I go to a store and purchased a bottle of Buckley’s rub prior to it being VAT free.

“A lot of people are not taking the time to read the budget because it’s a whole heap of fluff,” he said.

Earlier this month, Prime Minister Dr. Hubert Minnis gave a stern warning to all store owners, as he assured that they will be penalized for price gouging.

He warned that there are price control inspectors on duty, specifically looking to see if prices are accurate.

However, Pinder claimed there is no way to actually investigate price gouging.

“You can talk about how you’re going to prosecute people in price gouging well go right ahead,” he said.

“First of all, you have to define what is price gouging and usually it follows some exigency order in terms of a very narrow range of products, and its usually in terms of essentials … And so, the merchants are going to internalize or take on those additional benefits and very little will be left for the consumer – in terms of lower prices.

“That’s why I find it interesting that very few people besides the merchants are not complaining about the 12 per cent – because they’ve found a way to work around it.”

While there were some Rotarians who were in agreement to Pinder’s stance, others questioned how he would advise the current government. Pinder responded however, stating that it is not his place.

“I’m not an advisor to anybody, as part of the academic community my job is not necessarily to tell people the answer but help people search for the answer,” he said.