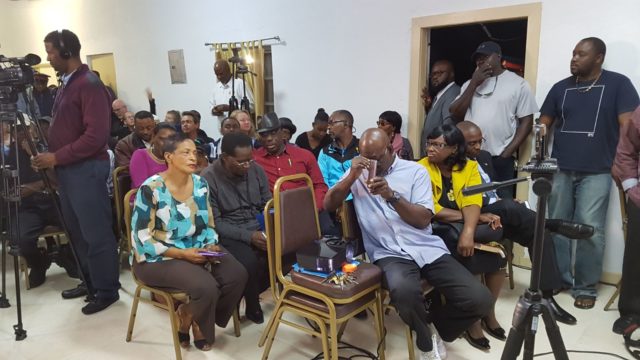 Scores of East Enders in Grand Bahama gathered at a town hall meeting with Oban Energies President Satpal Dhunna Thursday in a quest to get answers about the proposed $5.5 billion project set for their part of the island.

The desperation for job opportunities for those in the East End community of Grand Bahama overshadows the overarching potential environmental impact of the proposed $5.5 billion Oban Energies oil refinery and storage facility, according to residents, particularly the youth.

Eyewitness News spoke with a number of young people in the community on Friday who expressed that those who stay in East End suffer because jobs are few and far between.

“It’s a different dynamic for us,” said Princess Sears, 19, who graduated from high school three years ago and is currently working in a convenience store.

“We would love to do more and have better paying jobs but, if you don’t work for the government or Statoil in this area, what do you have left to make a real living?”

Sears, like so many others we spoke to said, while the threat of environmental degradation is concerning for them, jobs remain a priority.

“We need good paying jobs,” she said. “We need careers but, we know that with any development it’s not going to just fall in our lap. We too have to prepare ourselves.”

For Kingsley Kemp, 22, whose family has thrived off of bone fishing in the area, “times are changing.”

“People look at us and think that this is all we want to do,” said Kemp.

“Don’t get me wrong, fishing has brought us far and I would never diss it, but I’m ready to expand my skills and I think a project like this can help.”

In his address to Parliament last week, Prime Minister Dr. Hubert Minnis acknowledged that “mis-steps” were made in the Oban Energies deal and he ordered a comprehensive review of the project.

He also admitted that government acted hastily, as Grand Bahama he said, is in dire need of an economic resurgence.

“I give him wrong for not dotting his i’s and crossing this t’s,” said Ben Campbell.

“When you have all of these young people here looking for work though you have to do something. The prime minister I feel was trying to deliver, but he fell short. At the end of the day we still need jobs,” Campbell, 30, said.

When President of Oban Satpal Dhunna addressed East Enders for the first time during a town meeting Thursday night, he spoke of training and educational opportunities pre and post construction.

“We will have to implement training programs … and we are hoping that this will bring people back like the engineers and those who specialize in shipping and marine management… this will allow them to come back and be executive managers,” Dhunna said.

Following the meeting, many of the same young people had mixed views on the economic impact the project is expected to bring.

“By the time all the people from down in Freeport with their training and qualifications they knock us out of the water.”

Meanwhile Campbell said, residents of East End should prepare themselves for what is to come.

“The ball is now in our court,” he said, “If we let the opportunity pass us by then that’s on us.”

Dhunna promised East End residents that during job selection they will first get preference.