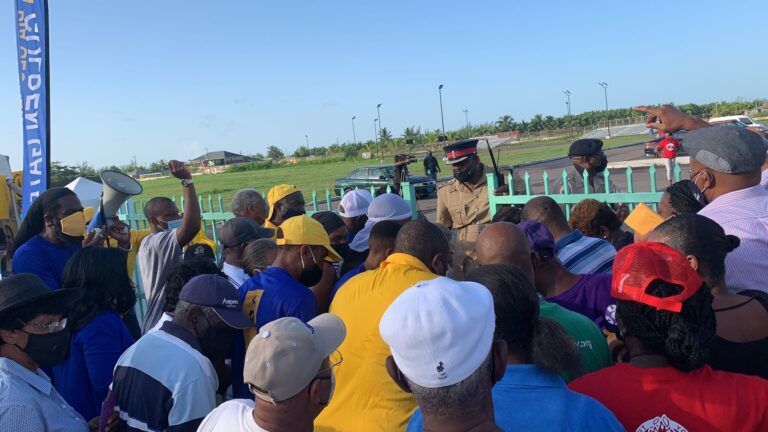 Voters waiting to be let into Anatol Rodgers High School where they will cast their vote in the advance poll for the Carmichael, Golden Gates, Southern Shores constituencies.

NASSAU, BAHAMAS — Thousands of early voters gathered on New Providence and Grand Bahama yesterday cast their ballots, but were met with a myriad of procedural issues in sweltering heat that frustrated the process even well after the last polls closed at 6:30pm.

Chaos erupted at several of the stations, reigniting concerns of the possibility of a spread in COVID-19 infections amidst an ongoing surge in the country and the confirmation of the Delta Variant as the predominant strain of the virus in the country.

There was little to no adherence to COVID-19 social distancing protocols at many of the stations, no marking or indications of proper protocols, disorganization and limited rooms at polling stations for voters to cast their ballots which resulted in bottlenecking.

Some voters expressed mixed views on the voting process at select stations, with some complaining of long lines and tight spaces while the sun beat down at a high of 91 degrees.

The Anatol Rogers polling station, where residents from Carmichael, Golden Gates and Southern Shores went to cast their votes, was inundated with large crowds and even larger incidences of errors.

Tensions began brewing at the station long before the polls opened, with some poll workers claiming they were initially barred from entering the campus by a police officer who reportedly advised them that unvaccinated workers were not allowed inside.

Some 30,000 applicants were eligible to apply during the advance polls, including people 65-years or older.

It was the first time that people 65-years or older were allowed to vote at the early polls.

However, despite the opportunity to avoid the large crowds on September 16, many voters expressed frustration due to the lack of provisions to accommodate the elderly and disabled.

Some senior citizens said it didn’t have to be that way, especially for senior citizens who had to stand in lines for so long, with their “health and safety being threatened.”

The mayhem for the day spilled over at C.R. Walker, where Bains and Grants Town incumbent had to step in as hundreds of voters waiting in line were accusing senior citizens and disabled people of attempting to jump the line.

There were also issues experienced with people casting their ballots, with one voter insisting that he was handed a ballot that had his voter card ID number written at the back.

Acting Returning Officer for Fox Hill William Pratt claimed that he was given a traceable ballot — that by law would be considered a spoiled one.

The incident raised red flags as to how many other people may have had the same issue but didn’t know any better.

Former Prime Minister Hubert Ingraham and his wife were also turned away from casting their ballots at the Gambier Primary School polling division after being told that they were not on the advance polling list.

Ingraham told reporters that after being turned away from two stations, he was contacted by the parliamentary commission who apologized for the error and advised that they were in fact on the early voter’s list.

DaQuan Swain, independent candidate for West Grand Bahama and Bimini said he felt disenfranchised after only one of the 15 poll workers he submitted to cast their ballots in the early polls were not allowed to vote, despite all having been registered.

While the majority of the polls opened on time, voting for 10 Family Island constituencies began shortly after 8.30am at the Michael Elden Complex at the University of The Bahamas, which pushed the closing of the polls at that station to 6.30pm.

Some 300 people were expected to vote at that station.

Meanwhile, the Central Grand Bahama and East Grand Bahama advanced polling stations at St. George’s Gymnasium were seen as orderly, compared to the scenes at the capital.

Officials were still sealing ballot boxes at Government High School after 8pm as candidates and poll workers expressed concern that some boxes were not being sealed properly before being taken away.

PLP Mount Moriah candidate McKell Bonaby said he was not happy with the process, but was confident the matter would be resolved.

He noted issues with the sealing of ballot boxes were also experienced in other constituencies.

National security minister and minister with responsibility for elections Marvin Dames told Eyewitness News earlier in the day that despite a few problems, he was pleased with yesterday’s process.

The 2017 advance polls were also seen as chaotic as hundreds of people stood in long lines for hours at limited centers on New Providence and Grand Bahama.