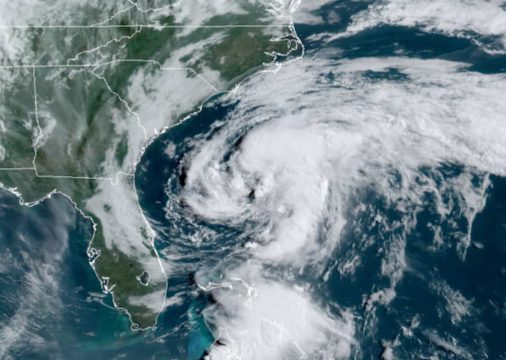 Tropical Storm Arthur, which made landfall over The Bahamas in May 2020 ahead of the traditional June 1 start of the Atlantic Hurricane Season.

NASSAU, BAHAMAS — A trend of tropical cyclones appearing earlier and earlier has led the World Meteorological Organization (WMO) to consider moving the start of the annual Atlantic Hurricane Season from June 1 to May 15.

Ahead of its 43rd Hurricane Committee meeting, the WMO published a document that revealed it will start to release weather advisories for the Atlantic basin as early as May 15 this year.

“The season will start as usual on June 1,” Dean said.

“However, the WMO is considering moving the date up to May 15 and the reason behind that is because last year was the sixth year in a row that we would’ve had a named hurricane prior to the start of the official hurricane season.”

Last year, Tropical Storm Arthur formed in May, and brought severe weather to the northwestern islands of The Bahamas.

Dean added: “In 2021, we will start the season as usual. But next year there could be a possible change to the hurricane season.”

Preparation will begin perhaps two weeks earlier than previously has been the case, he noted.

Bahamian PhD student Trevor Johnson, who is studying emergency disaster and crisis management, said climate change has caused the increased formation of tropical systems and Bahamians must change the way they prepare for storms.

“What this is trying to tell us is that we need not to focus on the exact timeline but be aware that we could expect to see some hydro-meteorological event before June 1,” he said.

“So, you need to orient yourself to begin preparedness tasks.

“The world’s climate is changing daily. We see sea surface temperatures are becoming warmer and this is indicative in the fact at how strong storms are becoming.

“If we look at Hurricane Dorian, it strengthened into an explosive Category 5 storm in a short period of time. And we saw the same thing happening last hurricane season.”

In 2020, the National Hurricane Center issued 36 “special” weather advisories before the start of hurricane season, according to their website.

In terms of preparedness, Johnson said: “In general, we need to look at how we mitigate against these hazards: what type of actions, what types of sustained actions, are we going to take to reduce property damage and loss of life?

“So, we are talking about things like not building along the sea wall, ensuring that we build our homes up to code and this requires preparation from the government.

“When we talk about preparation and talk about government, it’s not only at the individual household levels that have responsibility, but also the government.”

The Inter-American Development Bank has estimated damage from Hurricane Dorian to be as high as $3.4 billion.

That is why Johnson believes we must take the future into consideration when preparing for a storm.

“In the event that we have to leave our homes because of devastation or disaster, we need to start looking at contacts in other islands that we can stay with,” Johnson said.

“Let’s look a bit deeper than water, canned goods and other supplies. If our home is to be destroyed, who can I call on to assist me, meaning which family member can I stay with?

“Secondly, we must purchase insurance. It’s a big preparedness task that I think we don’t monopolize in the Bahamas.”