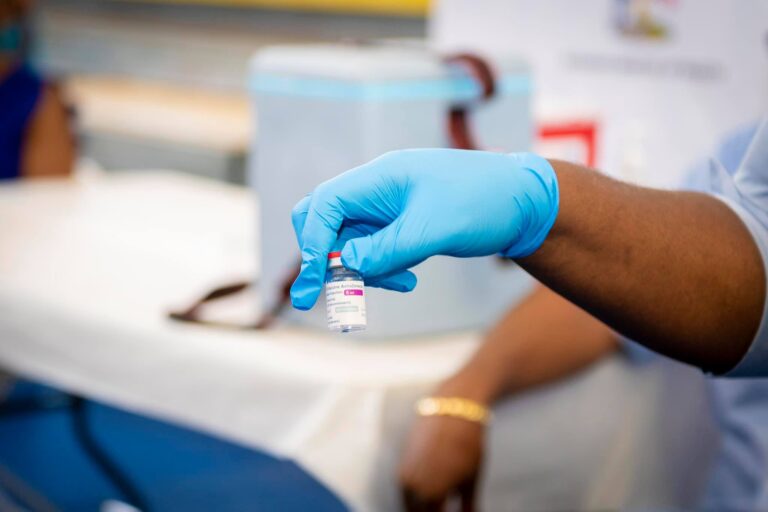 A healthcare worker holds a vial of the Oxford AstraZeneca vaccine at the Kendal GL Isaacs National Gymnasium on Monday, May 10, 2021. (BIS PHOTO)

NASSAU, BAHAMAS — National COVID-19 Vaccine Consultative Committee Co-Chair Ed Fields said while demand for the jab has been flattening, it is hoped that a greater push to educate the public will garner greater interest.

Asked how many doses had been administered in the last week, Fields said: “I don’t have that number right off the top of my head, I’ll be honest with you.

“But we have seen a flattening of the demand.

“But, you know, we hope that we’re going to go out and do more push in terms of getting people to understand where they are, so that’s where we’ll go.”

The committee has administered more than 36,000 doses to date.

The government has received 53,000 doses — 20,000 donated from the government of India and 33,600 from the World Health Organization’s (WHO) COVAX Facility.

According to Fields, the government could receive the balance of its doses from the COVAX Facility “any day now”.

As to acquiring vaccines from other sources, Fields said the committee continues to explore every diplomatic and government level.

He said there is an expectation that more supply will become available leading up to the summer months.

He said with doses that have closer expiration dates, “we will load those into arms as fast as we can prior to that date, so we don’t feel we’re going to have any issues with expiry dates”.

Fewer than 1,000 vaccine recipients were not integrated into the new appointment system to book their second dose due to a data glitch as the committee transferred to a new platform.

Fields noted that the data transfer challenge affected a very small number of people and should not interrupt vaccine recipients’ ability to receive their second dose.

He said when the committee began the development of the appointment platform for the vaccination program, it realized doses would arrive faster than anticipated and it resorted to a backup platform provided by Doctor’s Hospital.

He said that platform was not as flexible as the committee desired, but it was used to make appointments for the first 10,000 doses.

“In order to be able to issue certificates of vaccination, etc, we needed to have all the people who were on the Doctor’s Hospital integrated in the new system that we were using,” he said.

“And, as you know, any transfer of data creates some hiccups because you now have to transfer 10,000 names in the same format over to a new platform that may not have a matching format.

“I think out of 10,000, we recognized that we had probably somewhere between 800 and 1,000 names that did not transfer for whatever reasons.

Fields stressed there has been no loss of data on vaccinations, but just a matter of making updates and upgrading to the new system.