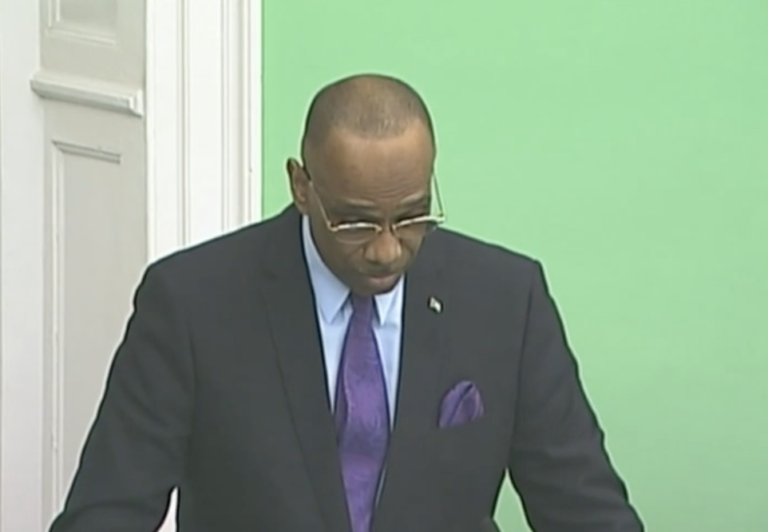 NASSAU, BAHAMAS — As he delivered another scathing rebuke of the Minnis administration, Pineridge MP Frederick McAlpine said yesterday that the government will not be able to convince the electorate that voting for the Free National Movement is about their future when the government “ignored us in the past while selling us dreams and schemes in the present”.

He said notwithstanding the challenges of Hurricane Dorian and the ongoing coronavirus pandemic, which has impacted the global economy, governments are elected to face these challenges and lead.

He said the prime minister ought to “stop whining”.

“Stop whining as if you’re the only one who’s encountered natural disasters or manmade occurrences.”

He continued: “Just in case those opposite my present position in this place missed the boat, which they do sometimes, this is about Dorian or COVID-19.

“It’s about your performance and management during and thereafter

“We expected there would be fiscal adjustments and economic reviews.

“What we did not expect was the way you made us feel; your lack of sympathy, empathy and compassion towards us as citizens.

“Even when you thought you were doing good; the manner in which some of your ministers spoke to us and at us, as if they were doing us some favor and/or they were spending their own personal money.”

He said: “Stop taking this personal. This isn’t about the people of The Bahamas, their livelihood, their existence, their country. People get elected to this place make-believe that they own this country. However, the people have a way of letting you know otherwise.

The prime minister stepped out during McAlpine’s address.

As he did, McAlpine chimed in: “And he’s off people. He’s running. He’s out of here.”

He said successive governments have had to govern as the nation experienced natural disasters and recessions such as after the terrorist attack on 9/11, the economic downturn and fall of Wall Street, the straw market fire, and a host of damaging hurricanes.

McAlpine said the Bahamian people voted for the Free National Movement with a belief that it was ‘the people’s time’ and a government would assume office and be concerned with “their needs”.

He said to date, he said “it seems like we have moved from bad to worse”.

He said the government’s performance has left much to be desired and disappointed the public at large with many FNM foot soldiers discouraged.

According to the Pineridge MP, the electorate cannot be convinced that another term will see promises honored.

Meanwhile, McAlpine said the prime minister has mirrored the governance style and speeches of former US President Donald Trump, but insisted come election time, the electorate will “trump you”.

“They now label Killarney the Donal Trump of the region,” the MP said.

“What folks don’t know is that you are one of [former] President Trump’s biggest fans.

“You mimicked his style of governance, behavior and speech; and I assured you the Bahamian people are about to trump you.”

McAlpine said when the FNM returns to Parliament, they will be able to fit in the back of a limousine.

The Pineridge MP said he could not predict who will win the next general election, but “I believe God is up to something and I pray I’m a part of it”.

“But I can assure this government, it won’t be you,” he added.

He said most of those whom he has served in Parliament “will not advance with some of us”.