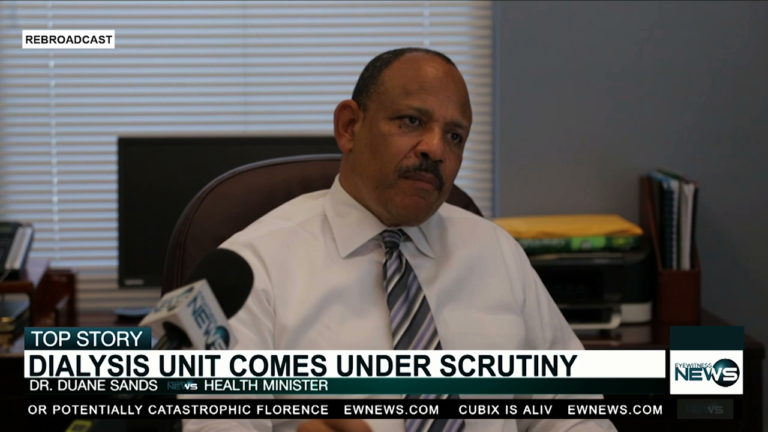 Until Bahamians start paying their hospital bills at the Princess Margaret Hospital (PMH), the public healthcare system in the country will never change, according to Health Minister Dr. Duane Sands.

Dr. Sands’ comments came after the inefficiencies of the Dialysis Unit at the Princess Margaret Hospital was highlighted in a leaked memo reportedly issued in July by Hospital Administrator Mary Lightbourne Walker.

The memo detailed the crisis in the Dialysis Unit, namely the shortage of trained nurses, a leaky ceiling, and a malfunctioning air conditioning system.

In an exclusive interview with Eyewitness News on Tuesday, Dr. Sands admitted that PMH needs a complete overhaul. But the real issue, he said, is the refusal of Bahamians to pay their hospital bills. In fact, Dr. Sands said the majority of persons receiving dialysis get it for free but the service costs some $48 million a year.

“The gazetted fees suggest that these individuals should contribute an amount towards the provision of that service, but the majority either cannot or do not,” Dr. Sands said.

“And so, it impacts the quality of care and the safety of care that can be provided in the healthcare system.”

Dr. Sands said it has been historically difficult to require patients to pay what they are mandated by law to pay. He did state, however, that things are about to change.

“What we are asking people to do is to pay the dramatically subsidized and gazetted legally mandated fees,” he said.

“Render unto Caesar what is Caesar’s.”

Dr. Sands said a different option would be an indirect tax to have dialysis patients pay upfront, to avoid asking for money at the point of service.

Meanwhile, Opposition leader Phillip Davis told reporters on Tuesday he doesn’t buy the “we don’t have any money excuse” and insisted the government needs to manage their money better.

“So instead of paying a vendor $60 million dollars why not say just ‘well look we know we owe you but we have these other pressing issues. I’ll give you $30 million cash now and take the other $30 million in cash and put it in the PHA for example’. It’s just a question of management, how you want to manage and where their priorities are,” Davis said.

“Minister Sands should just become a full-time minister, get to work in his ministry and quit the crybaby sour lime chatter. It’s embarrassing and it is unbecoming of a minister.”

Dialysis is way too expensive for every country, not just the Bahamas. You’re dead after only 3 years, at a cost of $300,000, having suffered a terrible quality of life for your final three years on earth. The irony is that kidney failiure has been preventable for over fifteen years (PubMed ID: 12396747). Nobody in healthcare will tell you about my 2002 paper because greed has replaced public health as the healthcare system’s only motivation.