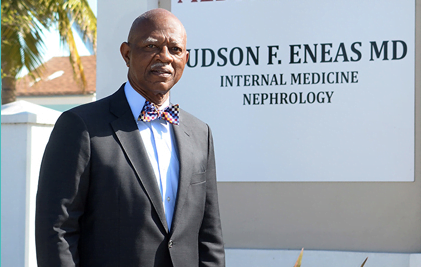 NASSAU, BAHAMAS – When Bahamian medical pioneer Dr. Judson Frazier Eneas, 72, was taken to hospital on Saturday night – four days after his coronavirus diagnosis – his wife of nearly 50 years could not go with him.

Officials confirmed early Sunday that Eneas became the first physician and the fifth COVID-19 death in the country.

Quarantined in her home hours after her husband’s passing, Marcheta Eneas sent out an impassioned voice note to her loved ones and supporters thanking them for their prayers.

“What God did last night, it was a perfect plan,” she said, her voice cracking.

Eneas was a veteran healthcare specialist and was among hundreds of frontline personnel engaged in treating and protecting Bahamians against the virus.

As she spoke of his unfortunate loss, Eneas’ wife insisted that she’s not angry, but sad.

“The saddest thing is that I couldn’t go to the hospital to say goodbye to him last night,” she said.

“And I’m also quarantined and unable to leave the house.”

Two of the couples three children live in California and with The Bahamas’ borders shut down to all incoming passengers amid the global pandemic, they may not be able to return to the country right away.

The grieving widow fears that even if her children were to make it into the country, “They won’t be able to come to their mothers home and find comfort.”

The couple would have celebrated their 50th anniversary on June 20.

“We had great plans but they are set aside now,” she added.

“…But I think my husband knew this day was coming and I think he left me in a pretty good state.”

Along with his dedicated philanthropy, Eneas was also an internist and nephrologist who introduced Dialysis to Doctors Hospital.

He had no travel history but was linked to a previous case.

According to sources, a dialysis nurse treated a dialysis patient who later tested positive for the virus.

That nurse reportedly worked closely with Dr. Eneas, who was later confirmed to have the virus.

Initial contact tracings of those three patients would have identified some 40 healthcare workers who may have been exposed, according to reports.

On Friday, some of the hospital’s staff were advised to quarantine for two weeks.

Doctors Hospital has closed its Collins Ave facility to the public and non-essential staff as officials undertake advanced cleaning of its operating rooms and Intensive Care Unit.

Of the cases, at least five are healthcare workers.

On Thursday, officials revealed some 50 healthcare workers had to be removed from the front lines and placed into quarantine.